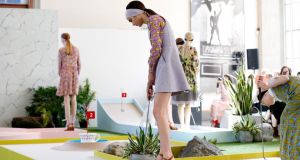 The hottest ticket at London Fashion Week at the weekend was for Simone Rocha’s show coinciding with the official opening of her first shop in Mayfair last night, celebrated with oysters and champagne.

The designer, who is expecting her first child in November, sent out an ultra-feminine collection in palatial Lancaster House that drew on familiar Rocha themes of modern romanticism in her signature girlish and playful way.

The pretty pink and white ballerina dresses with sheer overlays were criss-crossed with Perspex plaits and ropes but grounded typically with flat “jelly” sandals or silver brogues.

New this season were trim tailored suits in tobacco neoprene with flamboyant bows, William Morris-style printed dresses and grid-patterned devore velvets that concealed as much as they revealed. It was summery and modern with an offbeat elegance, which is bound to strike a chord with her worldwide fan base.

Orla Kiely teed off the weekend staging her collection in a crazy golf setting in the Royal Institute of British Architects attended by the institute’s former Irish president, Angela Brady. “My mother was lady captain of Woodbrook Golf Club and we used to spend many Sunday lunches there,” Kiely recalled.

Kiely has more irons in the fire next season, with a second shop opening in Tokyo and a forthcoming guest appearance on a BBC2 design challenge show.

The talented Wexford designer Richard Malone went his own way, using real people to model his trademark sculptural shapes fashioned using couture techniques with waste materials and setting them against an installation by artist Evelyn O’Connor. Both Malone and Romeril will show their collections in Paris later this month in the London Showrooms.

Elsewhere, veteran British designer Jasper Conran, a regular visitor to Ireland, went all green for summer 2016 with a masterly study of the colour in all its shades, stripes and prints modelled by a lineup of red-headed models.

Conran and his partner, the Irish artist Oisín Byrne, are to marry later this year.