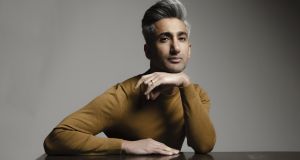 Viva le France: Doncaster-born Tan France hopes that by writing and speaking about his experiences as both a gay man and a brown man, he can challenge biases and prejudices

It is often said that if Tan France were a member of the Friends cast, he would be Rachel. Not because he has girl-next-door appeal, but because he regularly gets messages from fans seeking to replicate his hairstyle. “It is funny to see barbers tag me and constantly get frustrated like, ‘People keep asking me for the Tan France,’” he says. “That’s insane. That blows my mind.”

As the resident fashion expert on Queer Eye, the Netflix reboot of the old makeover show, France has gone from being a relatively anonymous fashion designer to a household name with an eponymous hairdo in less than 18 months. In that time, he has overseen numerous heartwarming makeovers, inspired a cohort of men to experiment with short-sleeved floral shirts, and introduced the “French tuck” to the world.

Now he has written a memoir, Naturally Tan, a breezy and refreshingly candid look at the man behind the patterned shirts. Not only does he tell the story of how he got to where he is, he doles out witty observations on fashion, personal style, grooming and dating. While many celebrity memoirs can feel a little formulaic and by-the-numbers, France benefits from having a genuinely fascinating life story.

The son of Pakistani immigrants, he was born and raised in Doncaster. In the book, he recounts how he was subjected to racial taunts and slurs as a youngster. At 13, he realised he was gay and spent much of his adolescence actively trying to hide any traits or mannerisms that might give away his sexuality, concerned that it wouldn’t be well received by his classmates or by his Muslim family and friends.

After school, he studied fashion and later worked for high-street retailers Zara and Selfridges. Eventually, he went on to work for a Utah-based modest clothing brand called Shade, which was geared towards Mormon women. When that company was sold, he established his own modest-clothing brand called Kingdom & State, and later partnered with a Mormon influencer, Rachel Parcell, on a separate clothing line. He left both businesses in 2017 and was snapped up by Queer Eye producers. He now lives in Salt Lake City with his husband, Rob France, an artist and son of Mormon cowboys. (Yes, really.)

France says writing the memoir gave him an opportunity to show a different side to what viewers are accustomed to seeing on Queer Eye.

“I am the most private out of all of us boys on Queer Eye,” he says. “I don’t talk about my personal life, really, and you’ll notice from the show I don’t talk about many of the things I discuss in the book. That’s because there are five of us and it’s a 40-minute show and there’s not enough bandwidth to be able to share what I want to share.”

Indeed, France is to be commended for not shying away from topics that could be considered divisive or controversial. The book contains a chapter titled 9/11 in which he offers “the brown perspective” on the September 11th attacks. He writes about how members of the South Asian, Middle Eastern and Muslim communities have since then been unfairly scapegoated and racially profiled.

He says he went back and forth about including the chapter in the book.

“It was something I thought I wasn’t going to add for the longest time because it was going to be inflammatory. It was going to cause some issues, especially for me in the US, but I needed to tell the Muslim side of that story. We’ve heard the other side for so long and it felt like I would be remiss to not mention the things I wanted to mention in that chapter. I am worried that I’m going to get a lot of issues from it, but I am ready for that.”

France says he gets “a barrage of hate” any time he broaches politics. After posing in a photograph with Nancy Pelosi and Alexandria Ocasio-Cortez, he and his Queer Eye co-stars were inundated with negative comments.

“The comments on those posts were the worst I’ve had in a very, very long time,” he sighs. “There is a lot of animosity towards people who talk about politics and aren’t involved in it.”

France also writes of feeling depressed and suicidal while juggling three different clothing lines. The pressure got so much that he once called his husband to say he wanted to drive his car off a bridge. Much of the stress stemmed from not wanting to be seen as a failure, particularly as he had moved to the United States against the advice of many people. To admit he was in trouble would to be concede to failure.

“That’s a very tough position to be in, and it really screwed with my head,” he says. “I would love to pretend that I’m the kind of person who doesn’t care what people think. I am not.”

He made a plan to sell his stake in the businesses and retire, not knowing that Queer Eye was on the horizon. It was the best decision he ever made.

“I knew my sanity was a lot more important so therefore I got out. That would be my advice: if you’re really struggling and it’s making you so incredibly unhappy, it’s just not worth it anymore. If it’s getting to the point where you’re feeling really miserable and it’s affecting every area of your life, is it really worth it?”

It’s not all heavy and serious, though. France also offers warm and generous insights into his marriage to Rob. There is one particularly lovely excerpt in which he explains how they communicate to each other almost exclusively in a secret language inspired by a character on Little Britain. He wants to put out a positive message about same-sex relationships.

“We don’t really talk about successful gay relationships a lot,” he says. “It’s not something you see very often in media. I wanted to talk about my love for my husband and how incredible he is and how happy my marriage is. I had to really cut it back because it was ridiculously gushy at one point and so I had to edit it so I didn’t sound insane or like I was a bunny boiler.

As the star of a show broadcast in 190 countries, France is aware that he has a larger platform than most. He hopes that by writing and speaking about his experiences as both a gay man and a brown man, he can challenge biases and prejudices.

“Do I think it’s going to change the culture massively? No, but if I change a few minds that’s good enough for me.”