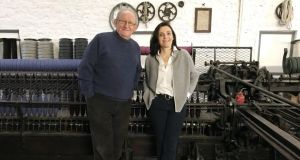 Miriam Cushen, pictured with her father, Philip, is the sixth generation of Cushen – and the first woman – to steer the family business which has been creating textiles since the early 18th century.

“We spent all our summers and weekends here in the mill and it got under my skin,” says Miriam Cushen of Cushendale Woollen Mills in Graignamanagh, Co Kilkenny. She is the sixth generation of Cushen – and the first woman – to steer the family business which has been creating textiles since the early 18th century.

Cushen is behind a stylish new collection of scarves, throws and blankets – launched this weekend at the virtual event, Showcase – using bolder colour fabric designs.

The family history is a long and proud one. “We have been here in this town forever,” she says with a smile, adding that the Cistercian monks from the 13th century, who founded nearby Duiske Abbey, were known as much for their monasticism as for their lucrative export trade in wool. Hence the town’s name, Gráig na Manach, village of the monks.

As her father, Philip, says, it is the quality of the water, the Duiske stream from the Blackstairs Mountains, in the mill race which dates from 1204 and one of the oldest in Ireland, if not in Europe, that is key to their success. It contributes to the softness of their products in Irish wool, lambswool and mohair. “We can get bright colour without any difficulty,” he says.

“The mohair is so superior because it has been handled so softly,” Miriam says. “It swims in a nice vat of colour and dries naturally in the air. Our colour palette and handle are unique.” Their Irish wool blankets are exported all over the world – to Japan, Canada, Russia and the United States – and have warmed many an Irish bed over the centuries.

Cushendale’s Irish wool comes from two flocks of native Galway sheep, one from a farmer in Wexford and the other in Sligo. “There are 1,200 registered Galway sheep and their wool is so soft. Irish wool is a priority for us, we hope to do more of it,” she says. In raw form, the mohair comes from Italy and lambswool from the UK.

This weekend Cushen’s new range of designs will demonstrate her ambitious approach to the business, developing it in a way that respects its heritage, sustainability and craftsmanship yet remains modern and fresh. Growing up in a family of seven and immersed in textiles, she was always at her father’s side at trade events. Unlike her siblings who became doctors, pharmacists or engineers, she trained in hotel management and business studies, later working for Diageo in Kilkenny and London. There was always, however, the intention of returning home.

Her father, who started weaving at the age of 13, drew his inspiration from the colours of the surrounding Kilkenny landscape for blankets, throws and scarves. Meanwhile, Cushen is passionate about exploring new colour combinations and prototyping new designs, citing artists Sean Scully and Ptolemy Mann as inspiration for what she calls their courageous use of bold colour and pattern. “I said let’s look at everything – we have fabulous colours and fabulous yarns, so why not experiment?” she says, pointing to the mohair throws in shades of cream, brown and orange and a fringed green throw called Kilkenny from the new range. “Being small, we are flexible.”

Another plan is to redesign the shop to open up views of the mill as well as operating more regular tours in the summer. Her husband, Trevor Ging, a former lieutenant colonel in the Irish army, conducts the tours which are popular with visitors. It’s an extraordinary experience to witness the whole process in the mill from fleece to fabric which, as Ging says, “has a human hand in every step of its 22-stage journey”.

All the mohairs and lambswools are hank dyed (a process involving eight to 10 steps) before weaving. The oldest machine from the early 1900s – a 50ft-long metal Victorian spinning mule – twists the yarn on to bobbins for weaving via a long carriage. Then there’s the teasing machine that fluffs out the fleece in clouds of colour, the massive tentering machine, the rapier looms, the carding and felting equipment. The whipping machine that hems the blankets is a Singer that was the first of its kind in Ireland after the second World War.

After one of these tours witnessing the awesome machinery at work, which some have described as “mesmerising”, the visitor will appreciate how the long-standing craftsmanship of the past continues to inform the present. You will never look at a blanket or a throw in quite the same way again.

Showcase, a virtual event this year, will run from January 25th to the 29th. Visit cushendale.ie for further information.