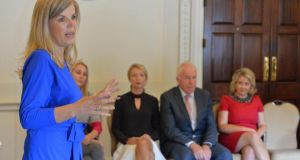 Ten Irish fashion brands are to be showcased on the first day of New York fashion week in September as part of a €50,000 promotional effort.

The event will be held in the Irish Consulate in Manhattan as part of Irish Design 2015. Details were announced yesterday by Minister for Diaspora Affairs Jimmy Deenihan, event promoter Marietta Doran and Orla Diffily, co-founder of Kerry fashion week.

It is the first of what they hope will be a regular annual showcase for Irish fashion in New York.

For a country associated with knitwear, the sole knitwear label is that of Lucy Nagle whose cashmere knits are made from Mongolian yarn in Scotland. Each designer will present key pieces from their spring/summer 2016 collections.

The emphasis was on highlighting some commercially successful designers in the various sectors – knitwear, millinery, jewellery and daywear – rather than emerging talents for the one-day event, the first of its kind to secure Government funding in recent decades. “We have worked really hard in a short space of time to do this,” she said.

Chief executive of Irish Design 2015 Karen Hennessy also announced that the work of a dozen up-and-coming innovative Irish designers will be presented at London fashion week in September.