McQueen to Dior and I: Eight of the best fashion films 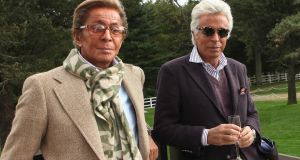 Valentino: The Last Emperor is a story of a love affair, charting the designer's relationship with his partner Giancarlo Giammetti (right). Photograph: Chelsea Lauren/Getty

Quite simply one of the best fashion documentaries, a fly-on-the-wall intimate portrait of the legendary couturier Valentino Garavani, one of Italy’s most famous names and a temperamental genius. It is also a story of a love affair, his relationship with his partner Giancarlo Giammetti and their entourage, how haute couture is made, the famous clients and how a business grew.

It took two years of footage to complete by producer and director Matt Tyrnauer, special correspondent for Vanity Fair, who had complete rights to the finished movie. Irish viewers will be interested to see Valentino’s Irish majordomo Michael Kelly in action; the chief butler is responsible for the designer’s five homes – in Paris, London, New York, Gstaad and his private yacht. On DVD

Fellini’s masterpiece, an impressionistic portrait of Rome that is part travelogue, part memoir, is a series of loosely connected episodes that highlight the material delights of the city – sex, food, nightlife and fashion. The one sequence alone of the ecclesiastical fashion show, which I first saw at Moma in New York as part of its 2018 blockbuster exhibition, Heavenly Bodies – Fashion and the Catholic Imagination, literally made me laugh out loud and view it again several times before I left the show. Guaranteed to have you in hysterics. Watch on YouTube

This sad, but compelling documentary profiles one of fashion’s great mavericks, Alexander McQueen, tracing his life from a London working class background and Savile Row training to his career in London and Paris haute couture and premature death by suicide in 2010. Often referred to as McCabre McQueen for his dark vision, he pushed the boundaries of fashion like no one else and believed women should be “empowered, frightening, sexual”.

A trained tailor, he maintained that “I am here to abolish the rules but keep the traditions.” There are candid interviews with friends, lovers and family, with the most moving contributions from his sister and brother. Viewers will also discover that McQueen trained with an Irish tailor and was a huge fan of Sinéad O’Connor. “It’s a jungle out there,” he once said about the fashion industry. At one point, he was designing 14 collections a year. On Netflix

A languid, lengthy portrait of the notoriously private Belgian designer Dries Van Noten which celebrates his life and achievements as one of the fashion industry’s true originals who, up to recently, remained proudly independent. It follows the designer moving through the process of designing more than four collections as well as showing aspects of his private life with his partner, Patrick Vangheluwe, and their fairytale home and garden outside Antwerp. It traces his career as part of the Antwerp Six in the early 80s, reveals his extraordinary perfectionism in every aspect of his life and work, and also shows him reflecting not just on his successes – his 100th collection had just been presented – but also musing frankly on his difficult periods at the end of the 80s. On Amazon Prime

A 90-minute documentary on the groundbreaking and enigmatic Belgian fashion designer focuses on the dynamics of the team around him who speak frankly about their role – he famously never gave interviews or allowed himself to be photographed. Irishman Patrick Scallon (now communications director at Dries Van Noten) was spokesman for the house.

It reveals the creative processes and risks this institution took which went against the grain of the conventional and were often ridiculed. The avant garde collections challenged accepted notions of fashion and taste of the time but Margiela can now be seen as one of the most influential fashion houses of our time whose influence can be seen on companies like Vetements and others. Watch on Apple iTunes

A behind-the-scenes documentary about the creation of Raf Simons’ first haute couture collection for the storied Paris fashion house as artistic director with only four weeks to complete it.

Access to Dior ateliers is a rare treat and even those not interested in fashion will find this documentary fascinating and mesmeric with Simons always in control, a reticent, intense and private man and the highly skilled artisans who actually make the clothes and their relationship with their new director who barely speaks French. The climax is the fashion show itself with all its pressures, the theatrical display of the collection in rooms decorated floor to ceiling with fresh flowers, the adulation of the audience and the relief of the designer. On Netflix

The annual red carpet extravaganza usually held on the first Monday in May to raise funds for the Costume Institute at the Met in New York, postponed this year (and who knows if it will ever be staged again), is the subject of this behind-the-scenes documentary.

We follow Andrew Bolton, the curator of the institute, and Anna Wintour, editor in chief of US Vogue, in the planning of this annual high “frock and awe” event. One is calm and quiet; the other icy and controlling (guess who?), particularly the latter when deciding on the seating plan – who to include, who to exclude or move. Bear in mind that tickets for this starry event cost $30,000 per person or $275,000 per table and that doesn’t include the cost of the gunas and dinner jackets. It is bitchy, revealing and left this viewer sickened by the excess and extravagance but at the same time fascinated by the intrigue and the dresses. On Netflix

Not a fashion documentary, but about a celebrated fictitious London fashion designer loosely based on the legendary Anglo-American Charles James, one of the most influential couturiers of the 20th century known for his elaborately constructed evening gowns and for his famous 1932 “taxi” dress. His work was the subject of a major retrospective in New York in 2014.

Set in 1950s London, Daniel Day-Lewis, in a meticulously perfectionist performance, plays designer Reynolds Woodcock who falls for Alma, a waitress who becomes his muse and lover. Woodcock runs the business with his sister, Cyril, who tends to his every need and the film shows the handiwork in forensic detail, how the clothes are made from the initial drawings and draping to their fitting and final sewing.

Our critic Donald Clarke described it as a “chilly chamber piece” concluding that “there is something of Hitchcock’s Rebecca over here and a little of Gaslight over there . . . the clipped cruelty brings us inexorably to Ingmar Bergman.” A riveting film. On Netflix