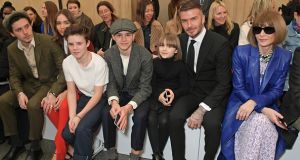 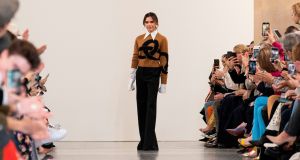 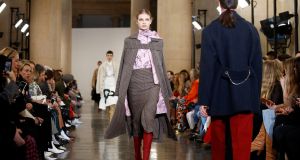 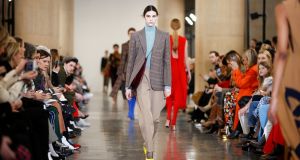 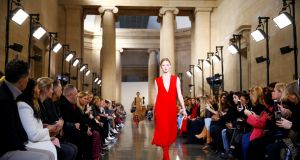 Victoria Beckham’s family turned out in force to support the designer at London Fashion Week where she put on an acclaimed show at Tate Britain art museum. Husband David, sons Brooklyn (19), Romeo (16)and Cruz (13) and daughter Harper (7) – with a sharp new bobbed haircut – sat in the front row beside Vogue's  Anna Wintour and Edward Enninful editor-in-chief of British Vogue.

The designer said in advance that she had been thinking about “modern femininity” and this was expressed in languid tailored window-pane check suits, demure Argyll sweaters, slouchy pants and hot red dresses with open-toed red leggings worn under caped overcoats.

Dominating the big shows at London Fashion Week on Sunday were those from Beckham launching her winter collection and debut cosmetics range via her new YouTube channel. Also receiving attention were Riccardo Tisci’s much-awaited second collection for Burberry and Preen along with Irish designer Natalie B Coleman.

In Beckham’s show, sunshine yellow or pink stilettos brightened up the mannish tweeds and black suits which she wears with such cool elegance. A polished show – her best yet was the common verdict. “These were clothes for real women” said Shelly Corkery, head of womenswear at Brown Thomas. “I think it was a wonderful collection, very clever and fills the gap left by Celine”.

“I have been thinking about what women want, about modern femininity,” Beckham told audiences in show notes describing her autumn/winter 2019 collection.

“Yet it’s all brought together into something encapsulating what we call the modern feminine alphabet,” said the 44-year-old former Spice Girl. “There are touches of retro, pinches of the 1970s.”

Beckham took to the catwalk herself wearing a mustard jumper, full-length black trousers and the pointed collar white shirt seen on several of the models in her show.

Irish designer Natalie B Coleman had also been thinking about modern women for her collection “Sisters” but with the clear feminist perspective that has always informed her work. A dreamy white wedding dress embellished with blood-red embroidery, for instance, had sleeves in Carrickmacross lace not worked in the usual botanical or religious patterns, but with delicate, subversive images of the vagina and clitoris.

This was a thought-provoking, beautifully handworked collection in collaboration with the United Nations Population Fund – a first for them using fashion to promote their message – exploring the powerful bonds of sisterhood. UNFPA, the United Nations sexual and reproductive health agency, had been impressed by her previous collection “Guaranteed to Bleed” shown in New York last May at the #wearingirish event.

Styled by Aisling Farinella, the installation featured a group of models working in a quiet lacemaking circle including a mother with her three pre-Raphaelite red-headed daughters all dressed in curvy Victorian-style ruffled black silk dresses. From Monaghan, Coleman has a strong affinity with handcraft techniques particularly lacemaking, one of Ireland’s greatest heritage skills, using symbols of women’s reproductive anatomy on dresses and sweatshirts to press home a message about sexual reproductive health.

“Fashion is an incredible medium of communication” said Matt Jackson, director of the UK office of the UNFPA at the event. “This is an amazing opportunity to use fashion to spread the message of ending harmful practices against women and girls into the homes and hearts of everyone”, adding that he hoped to bring the installation to Paris and New York later this year. One US visitor, Julia Perry, an LA-based stylist for Elon Musk’s mother Maye, was so moved by the presentation that she offered to make a donation.

Preen’s powerful show inspired by the culture of dance and music from highland flings to Morris dancing had an Irish angle too. Thea Bregazzi, one half of the Preen partnership, is of Irish extraction and proud of her Tipperary roots. The show’s opening kick-ass kilts worn over longer skirts and flying tweed panels were jaunty and flamboyant while long brocade coats and shapely dresses were enlivened with blue metallic threads. Irish model Lorna Foran was part of the line-up in a long sweater, black PVC trousers and clogs, one of the simpler combinations in a multi-layered but powerful collection with a modern punkish twist. “We wanted to chop things up but keep it grounded with tartans, tweeds and organic cottons,” said Justin Thornton afterwards.