Wexford firebrand shows his most refined, elegant and mature collection to date 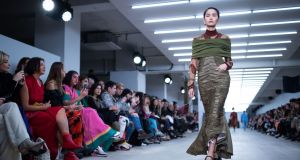 Models on the catwalk during the Richard Malone Autumn/Winter show at London Fashion Week at the BFC Show Space on Friday. Photograph: Aaron Chown/PA

London Fashion Week opened on Friday with the first of some 60 collections previewing winter 2020 amid protests from Extinction Rebellion demanding its cancellation and a statement from animal rights group Peta calling for a boycott of the Woolmark Prize, of which Irish designer Richard Malone is one of the 10 finalists.

Notably absent this season in London (as in New York) are top Chinese editors and buyers because of travel restrictions on flights to and from China as the coronavirus creates havoc in global fashion industry. Shanghai fashion week, due to take place in March, has been cancelled and Chinese brands will not be showing in Milan.

Richard Malone, who was one of the first designers in London committed to sustainability and whose eco-friendly, reusable canvas bag was commissioned by the British Fashion Council this season, was the main big name on Friday’s show schedule.

The Wexford firebrand, known for his resourcefulness and forthright opinions, continually pushes the boundaries of cut and construction, using ethically sourced fabric and, more recently, integrating technology in innovative ways. His augmented reality dress for television and radio presenter Maya Jama at the Baftas was the only one of its kind on the catwalk using recycled wool and regenerated ocean waste, and it made headlines. Hidden in its six layers of material were four battery packs and 12 sensor bulbs .

Malone’s new collection shown on the Strand lived up to all expectations. It is his most refined, elegant and mature to date.

Using leather for the first time – but carved from vintage offcuts into razor sharp belted coats and trousers – he gave a polished new twist to patchwork in camouflage colours of brown and green. Jaunty floppy hats and skirted hips added insouciance.

There were elements familiar from previous collections: the ruched dresses that compliment the female form, the sharp fit-and-flare trouser suits and the alluring knits. One ensemble comprising a harnessed cable sweater over narrow aproned trousers stood out for its modernity and freshness.

Strapping and belting and in some cases, full harnesses, were deliberate “to refigure tailoring with a quiet defiance”, Malone said.

His knitwear, including a felted bolero, were handcrafted in London by artisan knitter Nessa Ryan and the jewellery – looped gold neckpieces and earrings – were by Rosh Mahtani of Alighieri, who will receive the Queen Elizabeth Award for British Design on Tuesday. All the dyes – greens, blues, browns and burgundies – are natural, plant-based and organic and everyone in his network is fairly paid. Dyers and weavers are paid more than four times the Fairtrade average.

Whatever about Malone’s high standards and utter dedication to his work, his collection – opening with a black leather coat and ending with three abstractly shaped wired evening gowns – speaks for itself: stylish, womanly, modern, skilfully cut and crafted.

It was inspired by Mary Gabriel’s book Ninth Street Women, a pioneering work charting the lives of five female artists who drove a postwar revolution in modern art.

As a tribute to the day that was in it, Malone wished: “Happy Valentine’s Day to all of the people who I truly love and f**k Boris”.