Jacket chaos: Who was the intended audience for Melania Trump’s ‘don’t care’ coat?

The First Lady often seems to use her clothes as a private diary, this time it backfired 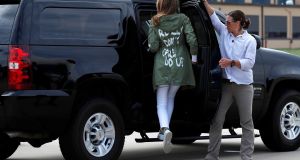 Melania Trump wears a Zara design jacket with the phrase “I Really Don’t Care. Do U?” on the back. Photograph: Kevin Lamarque/Reuters

When the US first lady, Melania Trump, on a surprise humanitarian visit to a children’s shelter in Texas, strode onto her airplane in an olive green Zara army jacket with those words scrawled in faux white graffiti on the back, it sent the watching world into what might be called, with some understatement, a meltdown.

“Insensitive,” “heartless” and “unthinking” were some of the words hurled through the digisphere about the choice.

“It’s a jacket,” her communications director, Stephanie Grisham, said in a statement to reporters. “There was no hidden message.”

She’s right, of course. It wasn’t hidden. It was literally written on the first lady’s back. The question is: Who was the intended audience?

To accept the idea she just threw the Zara jacket on because hey, it was close at hand and she was maybe a little bit cool (or something like that) is simply unbelievable.

So how else to interpret the Zara jacket, a style in line with the signature self-protective aesthetic she has developed since entering the White House, except as an indication Trump was thinking about what people might read into the clothes she chose to wear to visit children left with, effectively, nothing?

The jacket, after all, which is reportedly sold out and is not from the current season, retailed for $39. It may be the least expensive garment the first lady has worn while representing the administration.

And then there’s the fact that Trump has never been one to shy away from coding pointed, not necessarily, popular communications into her wardrobe. She did, after all, wear a white trouser suit — the uniform of the Hillary Clinton-led opposition — to her husband’s first State of the Union address.

All of which suggests there is very little chance she did not know what she was doing with that “I really don’t care” coat. Zara declined to comment.

So who was the target of that not-so-hidden message? That the first lady had shed the jacket by the time she disembarked in Texas may indicate it was not, in fact, the families at the heart of the immigration issue. Besides, there are numerous alternative possibilities, when you start to think about it.

There was her husband’s interpretation, as expressed via his favourite communication method, Twitter.

Or maybe the “I really don’t care” part was intended for critics of her husband’s policy. Maybe it was intended to tell everyone that she was not part of forming said policy, or not responsible for conveying everyone’s outrage about said policy.

Maybe it was intended for her husband. (The “free Melania” folks will like this idea.)

Or maybe, just maybe, it was a message for those of us who like to read messages into her clothes. One that said, “I’am going to wear whatever I want and I don’t care what you think about it.”

After all, she wore the jacket again deplaning later at Andrews — wore it unapologetically knowing all the hoo-ha it had caused, the confusion and umbrage, the distraction from what she said was her core message of compassion. Wore it as if to give direct proof to the words on her back. That would be kind of meta.

Trump often seems to be using her clothes as a sort of private diary, yet one that is parsed by millions who don’t have the rest of the text. Between intention and analysis an enormous gulf can exist. It’s a risky approach to her role.

And as interesting as the idea might be, this time it may have backfired.–New York Times

Art of darkness in a Ranelagh home