Ireland’s first androgynous model: ‘Defiance boils up within me’ 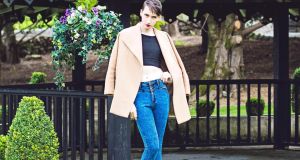 He stands 6ft 3ins in his bare feet, 6ft 7ins in heels, is a willowy size 8 and, when we meet in a cafe in Galway, the tawny gold eye shadow, Lancôme foundation and pale lipstick highlight his dark and striking features.

Gender lines may be blurring in fashion but where a woman in a suit is an everyday sight, a man in high heels does not go unnoticed. Today Fahy is wearing them with jeans, a cable sweater and glasses. “Men are still not as liberated in fashion as women – because in society so much is preventing them,” he says.

Fahy first made headlines at his graduation ceremony at NUI Galway – he got a degree in psychology, sociology and politics – where he wore high heels, jeans and a Britney Spears T-shirt. “It was a big moment for me,” he says with a smile. “I was really worried and unsure about doing it. I only had the stage for 40 seconds but afterwards people were like bees buzzing around me – it happened by itself. I knew it would get attention, because sadly that’s how it is. I didn’t want to conform and, for me, if I didn’t wear my high heels I would not have been at the graduation – the real Ivan would not have been there. Defiance boils up within me.”

One of two children of a Galway council worker and a nurse, Fahy grew up playing with both dolls and Action Man and realised he was “different” when he went to school “and to stay alive you have to fit in”. Although he hated football and was forced to hide his crushes, it was the loving support and acceptance of his parents and a mother who “raised me to be strong and brave” that gave him the confidence to confront being gay. “If you are straight you don’t think about sexuality and gender identity because you are within the norm and there is no questioning – you have that security.”

He started modelling in 2013 which was, he says, a defining year for him, his second year in college and when he first met like-minded peers. “I organised a few photo shoots in Galway and sent them to GCN (Gay Community News) for an article on androgyny and they put my image on the cover, so I became a cover star.”

After that he set up a Facebook page, posting ideas, and quickly got 15,000 followers. At the same time he started wearing make-up and found it fun “to learn your own skills and look kind of feminine, but it’s not something I do every day. It takes 20 minutes, but I am very visual and a quick learner. I try to keep things in proportion because you are trying to add to your face and not make a new one. I don’t have a lot of body hair and my voice is mid tone, so I am just in the middle and that’s the way my body is.”

As someone who describes himself as “gender fluid”, by which he means that dress and identity might change or be mixed, he is confident about ambiguity. “Dress is so important. We use it to express ourselves and I like to wear different things and have options. I like wearing high-waisted jeans with tights and I like layering, soft tops, jackets – the Kardashian style – it’s all about the waist and hips. I shop a lot in New Look and Penneys.”  He hates long denim skirts – “they are really ugly but, aside from that, I give everything a go”, he says, adding that his portfolio also includes modelling wedding dresses for a bridal show at the Gibson Hotel.

“Clothes lift your mood and make you feel confident and high heels make me feel confident because you take on a persona with them and I feel at my most confident in them.”

So what about people’s reactions on the street? “In the day time, being on my own is fine, but night time is risky,” he says. “I have long legs and the worst thing is when a man whistles at me thinking I am female, then realises that I am not . . . things can become hostile. That happens to transgender people a lot – and I am not a transgender who fully identifies as female if assigned male. One thing is physical and the other is personal. Gender is a construct and is all about perception and my idea of androgyny is a bit male and a bit female – both a bit emotional and a bit strong.”

He has become an activist and gives talks to Transition Year and Leaving Cert students in schools about gender, as well as doing “gender liberation fashion shows” all over the country – “Catwalks for those against the norm,” – though he would like to things on a bigger platform and elsewhere in Europe if he had the means.

He is looking for a nine-to-five job, but takes heart from the fact that he has a fan base of 30,000 on Facebook, a video with Thinkhouse PR that was viewed over a million times and his Ted talk in Galway “Diversity is Reality” may have emboldened many others.

“I want to take charge of my own power and make my own brand and everything I have done so far I have done by myself,” he says.

Carry on trading: The businesses working hard to keep us fed, and workers paid