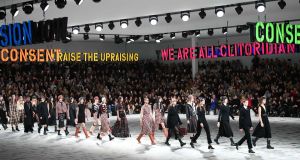 Patriarchy Kills Love, Feminine Beauty is Ready-Made, Women’s Love is Unpaid Labour, Women Raise the Upraising, Repression, and Consent – the latter sign kept flashing – were some of the illuminated slogans suspended from the ceiling at the Dior show on Tuesday which opened Paris Fashion Week.

After a day in which disgraced Hollywood mogul Harvey Weinstein was found guilty of rape, it was another feminist proclamation, a collaboration between Dior’s creative director Maria Grazia Chiuri and Claire Fontaine, a French conceptual artist known for placing illuminated signs in public spaces to highlight society’s contradictions. A new version of her work, Newsfloor, consisting of pages from the French daily Le Monde, was glued on to the catwalk.

The collection, which revisited the 1970s in modern ways, was drawn from Chiuri’s own memories of her teenage years when she used fashion as a way of asserting herself, of rebelling and communicating to others how she wanted to be perceived.

It opened on a dark, sober note, however, with a line up of slim black trouser suits on boyish models, some with white shirts and ties – like school uniforms – never mind the slashed and laced black dresses that followed.

Black dominated. There were black midi dresses, black jumpsuits, black leather jackets and black knits, all accessorised with CD-logo cross-body bags, flat brogues and scarves worn gypsy style. Minis and the midi skirts in brown shadow check or red and white plaid, with close-fitting Argyle-style knits, had a 1970s look, though some of the monochrome tweeds with blanket fringing seemed overpowering in both pattern and dressing-gown shapes.

Being Dior, of course, tailoring was a key focus throughout, in the jackets, in Prince of Wales print coats, in a cream three-piece trouser suit that had echoes of Bianca Jagger or another in black velvet. Sharply cut, those jackets kept long fringed or tulle skirts in place and looked girlish over short pleated skirts.

A black coat embroidered with flowers was a rare reference to the flower power of the 1970s, while sporty ensembles, puffa jackets and tracksuits marched to the current streetwear beat.

Whatever about the lighthearted dresses embellished with transparent black lace, others – long and flared in cream wool – or the endless procession of flying silk fringing on long skirts, this was a collection of sombre colours and a certain sobriety of tone. It lacked gaiety.

Maybe the spirit of the 1970s, with all the youthful optimism that the decade engendered, cannot be recaptured in the same way in darker times today, never mind growing female empowerment and feminist manifestos.

Dior is supporting an upcoming exhibition dedicated to Italian women artists called Io Dico Io, or I Say I, in Rome’s National Gallery of Modern and Contemporary Art from March 23 to 21 June 21st