‘Do 10 bicep curls and two selfies’ 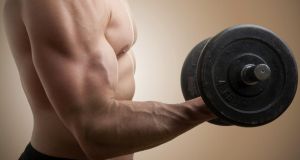 When they tore their shirts off it was to reveal string vests holding everything together. Then one morning they would wake up and it would all have slumped from the top and jutted out from the middle. Their nipples would rest exhausted on their bellies. Their shirt buttons would never again know anything but strain, hanging on against constant pressure as if freeze-framed in the last moment before Bruce Banner truly becomes the naked Hulk. But there would be no Hulk once those shirt buttons burst.

Until now. The greatest single measured jump in sporting activity in the past six years has not been on grass pitches or pounded roads. It has been in the gym. On weights benches. You see it on the streets, but it’s in print now thanks to the Irish Sports Council’s latest tracking of sports participation in Ireland.

In 2007 a mere 0.3 per cent of people did weights. Last year that was 2.9 per cent. It doesn’t seem like much, but it’s the biggest jump of the sports measured, and it speaks of several recent factors: of the importance of weight training to other sports; the proliferation of gyms across the country; and, perhaps most of all, the desire to look good in the era of the selfie.

The biggest percentage jump in weight training is actually among women, their use leaping across the age- brackets all the way up to the 50s. It is fairly consistent too, with women in their 20s as likely to use weights as those heading into their 40s. This trend has happened almost entirely in the past two years.

There was a brief flourishing of women-only gyms a decade ago, but that was an interregnum, a bridge between the way things used to be and the mixed, friendlier environments most gyms are now.

But the attitude is different. In 2012 a Department of Children and Youth Affairs survey confirmed a gender divide in attitudes: women use the gym to lose weight; men use it to pack weight on.

Among men the graph rises like a flexed bicep. The big use of weights is among 16- to 35-year-olds, with its popularity greatest among 20- to 24-year-olds. None of which is any great surprise, especially to anyone who uses a gym regularly (although the biggest increase has come among over-45s). You can find them chugging on protein drinks between grunting through weights sessions, and you can see their motivation backed up in the profits of the “sports nutrition” industry. It is no coincidence that in Ireland the largest share of that market belongs to a company that has only recently changed its name from MaxiMuscle.

Even though the rise of weight training has happened quickly, its ubiquity means we already take for granted that many young men work out. Yet it’s worth remembering how alien this would have been only 20 years ago, when gym membership was an exclusive, aspirational thing, and when weight training fostered an intimidating environment.

Weight and gym training have since followed the general drift towards sport as an individual pursuit, slotting in alongside running, cycling, swimming and water sports as something to jump into at a time that suited. But even then it stands apart. Yes, a great many of people doing weights are doing so because it improves their performance in other sports, and some are doing it primarily for fitness or to ward off the injuries of ageing – or because those injuries won’t allow them to continue their chosen sports.

But what makes weight training novel, in an Irish context, is that it is a reflection of a body-conscious age, of constant self-reflection and public appraisal.

As women have long done, men now also see the ideal in celebrity culture, in the abs on men’s magazines. Rugby players bulk up. GAA players bulk up. Hell, even Rory McIlory turned up topless in the Ryder Cup celebrations and looked far more like Conor McGregor than Colin Montgomerie.

It is the rise of a sport that is not about making someone good look on a pitch but about how they look in a T-shirt and on Instagram.