Demolish your stress with a small, portable device that works with your phone 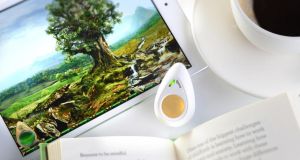 The Pip: small and fob-like, it fits between finger and thumb and measures stress

Normally things are pretty peaceful at the offices of Galvanic, the Dublin company which has invented the latest device to merge the worlds of smart technology and mental health. The Pip, a small fob-like structure which fits between finger and thumb, measures your levels of stress. It communicates via Bluetooth with mobile phones and tablet devices. Various apps played on the mobile phone or tablet show you scenarios to calm you down. This is the stress management of the future.

“You be the green dragon,” says Daragh McDonnell, chief technology officer at Galvanic ,who developed the Pip.

Don’t mind if I do. The green dragon left the red dragon in the dust, baby. Before she landed peacefully on a Celtic dolmen with spiral patterns on it. But this is not the attitude that Galvanic and Pip are trying to encourage.

“It’s not instant gratification,” says McDonnell. “It’s something you have to learn. You have to engage.”

The green dragon and the red dragon are part of a game, Relax&Race, in which calming yourself down makes your dragon fly faster. It looks like a video game – the dragons fly over a Tolkien-type landscape.

One of the Pip’s strongest selling points is the fact it is so discreet it can be used pretty much anywhere. Traditional methods for giving this type of feedback were, as Prof Ian Robertson, chair of Galvanic’s science advisory board, puts it: “Rather cumbersome.” The Pip is so small it fits in your purse. Executives can use it without their colleagues knowing. Children with anxiety issues can play with the Pip to calm them down; child psychologists have given Pip to patients as part of their homework.

The Pip may look like the type of thing that unlocks your car – or a plug-in air freshener, or indeed a large fruit pip. It is in fact a bio-sensor, measuring the sweat and electrical activity on your fingertips – or skin conductance, to put it scientifically. According to Robertson, who is a psychology professor at Trinity College Dublin: “Skin conductance is an excellent measure of the brain’s degree of arousal. That is, its level of alertness and emotional activation.”

The good news is that humans are very adept at calming themselves down. But we do this best when we’re given a way of observing our responses. To quote Mae West in another context, Pip allows us to see how we’re doing.

The marriage of new technologies with mental health is a happy one. With people more stressed and isolated than they have ever been, and with ever-growing waiting lists for medical care which is frequently expensive, devices like Pip are the future. (Pip costs €170, and is sold only online. )

Pip is manufactured in Cork. Notwithstanding the calmness at Galvanic these days, it had quite a stressful birth. Its first delivery was postponed when the chief funder of the project went bust in the crash of 2008. It was revived when businessman David Ingram, now chief executive of Galvanic, bought the intellectual property pertaining to Pip out of liquidation. Galvanic also has an angel investor – businessman Christopher Bielenberg, who has provided about €800,000 of €1 million invested in the company so far. And, last year, Galvanic sought Kickstarter funding, raising $100,000 and a lot of eager people volunteering to try Pip out. “A huge variety of people have tried Pip and given us feedback, “ says McDonnell.

A second app to be used with the Pip contains a story called New Life, which shows winter turning to summer in a pastoral landscape which starts shrouded in snow, with a solitary bare tree. New Life has helped quite a lot of people with sleeping problems, says Daragh. The more you relax the sooner summer arrives.

That night a source close to The Irish Times manages to activate both the Pip, and New Life, no problem – and this from a person who can hardly operate a tin opener. I held the Pip in my left hand and the phone in my right. I just couldn’t turn on the sound track. Never mind. The only problem is that I like winter. This is just as well as it is winter on the screen for a solid 15 minutes.

The Irish Times is conducting a small survey on stress management. If you would like to participate, please email us at health@irishtimes.com

Buy yourself a dream. . . with the planning headaches sorted
7