Any room at the inn for Homeless Jesus in Dublin?

Tim Schmalz is hoping the capital can find a home for his controversial statue, an ambition that is especially pertinent after the death of a homeless man near the Dáil 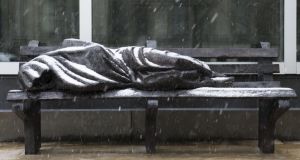 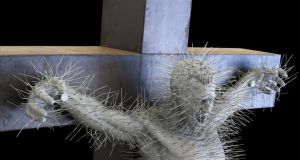 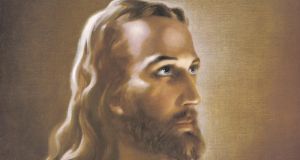 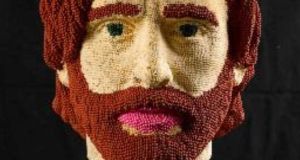 David Mach’s Jesus made of matchsticks

Somebody called the cops on Jesus in Davidson, North Carolina, where one resident reported “him” to the police, mistaking the life-size bronze by Canadian sculptor Tim Schmalz for an actual vagrant. “Jesus is not a helpless person who needs our help. We need someone who is capable of meeting our needs, not someone who is also needy,” complained the woman, Cindy Castano Swannack.

Other residents called it an “insulting” depiction that “demeaned” their upscale neighbourhood, where the sculpture was placed outside St Alban’s Episcopalian church. But the rector of St Alban’s, Rev David Buck, stood by his decision to accept the sculpture: “We believe that Jesus was, in essence, a homeless person.” He quoted the Book of Matthew: “As you did it to one of the least of my brothers, you did it to me.”

Now the religious sculpture that has divided communities in the US and London is looking for a home in Dublin. Homeless Jesus is, in its own way, as shocking as Andre Serrano’s Piss Christ and David Mach’s flammable head of Jesus made of matchsticks. Homeless Jesus, rejected by cathedrals in New York and Toronto, is quickly becoming as revealing of its resident city’s culture as a Banksy piece.

“I visually translate the gospels, and I work at finding the best way to give visual representation of Christian concepts,” says Schmalz, speaking from his studio in the countryside outside Toronto.

His depiction of Jesus may be challenging for some of those accustomed to traditional religious art in which a glorified chocolate-box Christ is enthroned in finery, bathed in light and painted in gaudy colours. Jesus is often depicted in the West as a Brad Pitt or Christian Bale lookalike.

The cliche of Jesus is Warner Sallman’s wavy haired, blue-eyed Head of Christ, which has been reproduced half a billion times since it was created in 1940, and which some credit with having the power to dispel evil. Along with the Catholic Divine Mercy and Sacred Heart images, it is part of a 20th and 21st century visualisation that Schmalz calls “tacky”.

It’s daring to attempt not just a new image of Jesus but to disseminate it worldwide, but that’s what Schmalz is doing, with the help of a mystery Episcopalian benefactor, who is giving 12 Homeless Jesuses to cities around the world, free of charge, including shipping.

Pope Francis was one of the first to give Homeless Jesus a good review. In a gold-leafed Vatican boasting the grandeur of da Vinci and Michelangelo, Pope Francis was so overcome by Homeless Jesus when Schmalz presented him with a scale model during a Mass audience. In the midst of the crowd, the Holy Father stopped, lay a hand on the statue, closed his eyes and prayed. Schmalz was awe- struck. A completed bronze is now set to be placed on the Via della Conciliazione, the grand approach to the Vatican.

“At first glance you think it’s a real person on a park bench; at second glance you see it’s a sculpture; and, at third glance, you see the holes in the feet and realise it is Christ. These three moments of realisation are part of the aesthetic experience,” says Fr Michael Czerny of the Vatican.

The moment when the viewer realises the figure is Christ “reminds us that we look at the homeless but we don’t see”, he adds.

“We hope to find the perfect home in Ireland, ” says Schmalz, whose bronze of Matt Talbot, patron saint of addicts, is in the Pro-Cathedral, Dublin. Molesworth Street, near Leinster House, where a homeless man was found dead last week, seems apt.

The rule set by Schmalz and his funding patron is that the Irish public suggest places for the sculpture, which readers are invited to do through The Irish Times. The benefactor, with Schmalz, will then choose one of the nominated sites for the sculpture, which costs $22,000. The benefactor will also pay shipping. Nominations can include church grounds of any denomination and public areas.

“I think it’s fantastic. I would love to see it in Stephen’s Green,” says Fr Peter McVerry, who has devoted his life to the homeless. “The difficulty of putting it by a Catholic church here is the lack of concern that the church has for homeless people. So I think it’s ironic putting it outside a [Catholic] church. In Stephen’s Green, people sleep on benches, so it would appear like someone on a bench. It’s also a place where people sit and contemplate.”

“I think the statue is absolutely beautiful. It goes beyond religion,” says Dermot Dunne, the dean of Christ Church, who recently slept rough to highlight the plight of the homeless. He would welcome Homeless Jesus on the grounds of the cathedral. “We are in the centre of the city, where I’m seeing homelessness all the time, and it’s getting worse. Forty families a week are going homeless.”

The ecumenical nature of the offer of Homeless Jesus to Dublin is “hugely significant”, he adds. “I like to think of it as postdenominational. We are in a postdenominational age and the issue of homelessness is one that can transcend religion and raise this awareness to the next level.”

“I would support the sculpture coming to Dublin, and I think it would go down well,” says lord mayor Christy Burke, who would like to see it on Custom House Quay near the famine statues, and near where homeless people sleep on the Custom House steps.

The protocol, according to city manager Owen Keegan, is for the statue to be first considered by the City Council’s Art and Culture Advisory Group, who make recommendations to the Arts Strategic Policy Committee, with the ultimate decision resting with the full City Council.

“It’s like they were saying, ‘Homeless people aren’t allowed to sleep on benches, so why should Jesus?’” says Schmalz.

He quotes Oscar Wilde, who once said that the people of London didn’t see the fog until the painters started painting it.

Schmalz had no religious upbringing, but in his teens he began to feel a calling gradually grow, and in his 20s considered the Catholic priesthood. He is now a devout Catholic, and is married and has two young children.

“I have asked myself concerning the Jesus sculpture going viral: why now? Maybe it’s that we’ve never had more space between the rich and poor.”

In London, after being considered and rejected by the oldest parish in London, St Andrew, Holborn; and by St Bartholomew’s and St Paul’s, where “red tape” prevented acceptance; Homeless Jesus was finally given a home by Westminster Central Hall, headquarters of the English Methodist Church, which faces Westminster Abbey.

“One problem people had was that the sculpture makes them uncomfortable because it crystallises the problem. The sculpture supposedly ‘objectifies’ the homeless, but it’s objectifying them as sacred human beings by using Jesus himself, who said, ‘When you see the hungry, the homeless, you are seeing me’.”

Apart from raising the question of whether it may be as Christ-like for churches to offer places to sleep as places to pray, the rejections signal the political correctness that can wrap Homeless Jesus in red tape rather than giving him a place to lay his head.

At 18, Schmalz won a national competition for a scholarship to Ontario College of Art and Design, but left after three months because he couldn’t stand the “nihilistic” approach to art he found there. Schmalz is largely self-taught as a result, and he tries to communicate to Christians and non-Christians alike, blurring the lines between sacred and secular. It pleases him to hear comments such as, “I’m not religious but I like this”.

He was inspired to create Homeless Jesus after having a spiritual epiphany in the middle of the busiest street in the busiest city in Canada. He saw a homeless person wrapped up and lying down, and, as if seeing this for the first time, he reacted viscerally. “It was shocking, I was shaking. I thought that I saw Jesus, and that carried with me. I’m a sculptor, so I have to express this experience through art so other people can come to that same heightened awareness.”

In Ireland, his sculptures of Celtic saints are at Knock Shrine in Co Mayo, and Co Kildare is home to his St Brigid of Kildare. He had rather audaciously hoped to create a 100ft-tall St Patrick on Croagh Patrick as a gift from the American people to Ireland, but the sculpture was rejected by locals. It would have been the tallest St Patrick in the world, and just 24ft shy of Rio de Janeiro’s Christ the Redeemer.

After going viral due to controversy surrounding it, Homeless Jesus has quickly become the sculpture for which Schmalz is best known, and installations are planned for Washington DC at the behest of Cardinal Donald Wuerl; in a Lutheran church in Phoenix, Arizona; and in Montgomery, Alabama, where it will be placed to honour Martin Luther King. Dublin would be in good company were it to accept the sculpture, and Schmalz believes that its religious nature should not put people off.

“The appeal of Homeless Jesus is closing the gap even more between Catholics and other Christians,” says Schmalz. “It is also a way to bring the message to people who would not ordinarily walk into a church. It’s a message for the homeless as well: that they are sacred.”

Email your suggestions for a site for Dublin’s Homeless Jesus to homelessjesus@irishtimes.com