You don’t need a green jersey to support #WearingIrish 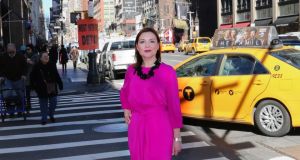 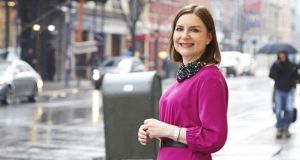 It’s an idea that is so apt, it’s surprising no one thought of it before. While it’s popular to wear green on St Patrick’s Day, credit for the idea of taking over the month of March and declaring it the territory of Irish designers with its own hashtag belongs to Margaret Molloy.

The Irish woman decided to do her bit to put Irish designers in the limelight by wearing Irish fashion, jewellery and accessories in the run up to St Patrick’s Day last year. She posted pictures on Facebook, Twitter and Instagram with the hashtag #WearingIrish and invited everyone to join in.

“I realised that I had an event to go to every day in March, so I thought why not use that to help people by promoting Irish designers,” says the Offaly woman, who lives and works in New York. “Irish design has an exhuberance and vibrancy that suits my aesthetic. At 5ft 2in, however, I’m no fashion model but I can be a role model and use my social media influence."

It helps that Molloy, a Harvard graduate who is global chief marketing officer at Siegel+Gale, a leading global strategic branding firm, has been named a top social media influencer and has more than 30,000 Twitter followers.

The idea is to feature goods designed in Ireland, made in Ireland, or created by Irish designers anywhere in the world. This is about so much more than Aran sweaters, Claddagh rings and heavy tweeds. Molloy is keen to spread the word about designers who add a modern twist to traditional fabrics and jewellery design, for example, as well everyday well-known names such as Paul Costelloe.

To aid the process there is a list of approved Irish brands in a #WearingIrish Directory on Medium.com with links to where to buy them. It includes women’s and men’s fashions, jewellery and accessories. The listing is wide ranging from such designers as Orla Kiely, Jennifer Rothwell and milliner Philip Treacy, to Carolyn Donnelly’s Edit for Dunnes, and even Primark (aka Penneys).

Rothwell got involved after Molloy got a lot of compliments when wearing her hummingbird dress. “Margaret is doing this for the right reasons,” says Rothwell. “The more people who celebrate Irish design, the more there will be a demand for it. I’m very passionate about promoting ‘Made in Ireland’.”

The initiative officially begins today and runs throughout March, but the #WearingIrish hashtag has been popping up on Twitter with increasing frequency in recent days. Don O’Neill of Theia used the hashtag with a photo of RTE’s Washington correspondent Caitriona Perry wearing one of his sequinned dresses at the Oscars on Sunday.

Molloy plans to post a photograph of a new outfit every day in March, or even two if she has an engagement in the evening. It can be difficult to find Irish clothing in New York, she says, so she buys pieces online and gets them altered.

She is keen to highlight that #WearingIrish is a purely personal campaign to support Irish fashion. It’s not paid and she is not sponsored. “It’s a passion project. I am fascinated by the possibilities that social media provides for ordinary citizens to show their support for brands and causes.”

She is calling on men and women around the world to get involved by taking a picture of themselves or somebody else wearing something Irish, and posting it on social media using the #WearingIrish hashtag.