The story of Jack-o’-lantern: ‘If you knew the sufferings of that forsaken craythur’ 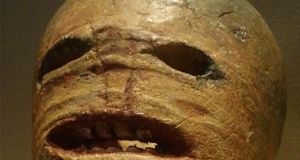 Carved Halloween turnip from about 1850 in the National Museum of Ireland. Photograph: Country Life/ Wikimedia Commons

Samhain, the root of Halloween, was a Celtic festival - a night when spirits walked the earth, and the living would prepare themselves for visitations of guests both welcome and unwelcome. From this atmosphere of anticipation and unease come traditions, which are both celebratory and defensive. Masks were worn to frighten away demons. Turnips and other root vegetables were carved with terrifying faces in order to scare unwelcome guests, both living and dead - and tricks were played on the unsuspecting.

We often hear carved pumpkins referred to as jack-o’-lanterns, an Irish-sounding term mostly used in America. There’s a rich mythology behind the name of the familiar carved pumpkin or turnip, a folk tale found across Ireland, Scotland, and in Somerset on “Punkie night”.

Jack-o’-the-lantern initially referred to the natural phenomenon of ignis fatuus, the flickering marsh-lights that appear over bogs and can often lead travellers astray. Also known as Will-o’-the-wisp, Irish folk stories offer explanations for this phenomenon. In the 18th century, the eponymous Jack, or “Stingy Jack” was said to be a mean-spirited blacksmith who tricked the devil and in return was given an ember from hell to light his lantern. An article in the 1836 edition of the Dublin Penny Journal explores the myth in detail. The author, when travelling with his excessively talkative uncle through a dark night, is confronted by the phenomenon. His uncle tells the tale of Jack-o’-the-lantern, showing his pity for this cursed figure doomed to wander with his lantern:

“If you knew the sufferings of that forsaken craythur, since the time the poor sowl was doomed to wandher, with a lanthern in his hand, on this cowld earth, without rest for his foot, or shelter for his head, until the day of judgment… oh, it ‘ud soften the heart of stone to see him as I once did, the poor old dunawn, his feet blistered and bleeding, his poneens (rags) all flying about him, and the rains of heaven beating on his ould white head.”

The story recounted by the uncle is intriguing and complex, with Jack, the mean peasant, beginning the tale with an uncharacteristic act of virtue - helping an old man by the roadside. The old man transforms into an angel and grants Jack three wishes. Jack wishes for anyone who sits in his chair, plucks a bough from his sycamore tree, or attempts to borrow his cobbling tools to be stuck to the spot. The angel, disappointed, grants the wishes but Jack is now barred from heaven. When the devil send messengers to claim him, they are tricked each time by Jack’s false hospitality, but there’s no happy ending for Jack - barred from heaven and hell - he wanders the earth alone.

It’s fitting that a character trapped in an earthly purgatory should become the lasting symbol of Halloween, a time when people are as wont to offer a “trick” as a “treat”. The character of Jack, a figure who doesn’t fit into heaven or hell, is unusually complex for a figure from a folk tale.

Jack-o’-lantern’s transformation from folk antihero to carved root vegetable is another chapter in the story. There are references to the carving of turnips, beets and potatoes at Halloween in Ireland in the 19th century, but the conflation of the Jack-o’-lantern story with pumpkin-carving seems to have happened in North America, with immigrants from Ireland adapting their traditions to American harvest customs. The first North American reference to Jack-o’-lantern comes courtesy of Nathaniel Hawthorne’s 1835 story, The Great Carbuncle, about a group of adventurers seeking a precious stone with mystical qualities:

“Hide it under thy cloak, say’st thou? Why, it will gleam through the holes, and make thee look like a jack-o’-lantern”.

While the image evoked here suggests a carved pumpkin, it’s just as possible that Hawthorne is referring to a Will-o’-the-wisp. An earlier reference, in Washington Irving’s Sleepy Hollow (1820), has the headless horseman fling a pumpkin at Ichabod Crane, but it’s not mentioned whether the pumpkin is carved - it could merely be a useful head-shaped object, readily available to a prankster on a dark autumn evening. The first definite connection between pumpkins, Halloween and the Jack-o’-the-lantern comes in a Canadian news report from Daily News in 1886:

“The old time custom of keeping up Hallowe’en was not forgotten last night by the youngsters of the city […]There was a great sacrifice of pumpkins from which to make transparent heads and face, lighted up by the unfailing two inches of tallow candle”.

Later, the myth seems to have evolved again so that the carved pumpkins were intended to scare away the spirit of Stingy Jack, rather than to symbolise the lantern he carried - another example of the rich layers of myth, folktale and ritual that inform our Halloween traditions.

This Extraordinary Emigrants article was written by Jessica Traynor, deputy museum director at EPIC The Irish Emigration Museum, an interactive museum that tells the story of how the Irish shaped and influenced the world.