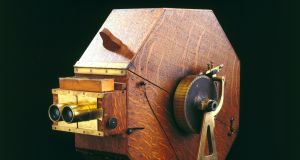 Earlier this year scientists at the California Institute of Technology announced they had developed a new photographic technique capable of capturing 70 trillion images per second. This new process is so fast that it will allow us to capture nuclear fusion or even the florescent radioactive decay of molecules in real time. It will help us to confirm previously theoretical or partially documented phenomena for the first time and to see things that the human eye has never before seen. Yet all of this might not have been possible without the innovative work of Dublin born Lucien Bull, an inventor and early pioneer of high speed photography.

Born on Gloucester Street in 1876, Bull was the son of English immigrant Cornelius Bull and Gabrielle Jouvé, who was from France. His parents ran a religious depository on Suffolk Street. He went to the prestigious Belvedere College in Dublin before emigrating to his mother’s native Paris to attend the Faculté des Sciences at Paris University.

Bull possessed a curious mind and was fascinated by the natural world. He chose to study zoology, botany and geology, which would complement his interest in physiology. While a student he also began to develop a fascination with photography and how it might be used as a tool to tell us more about the world around us.

At the age of 20 he decided to become the assistant of the cinematographic pioneer Étienne-Jules Marey, later working at the research institute named in his honour, the Institut Marey, from 1904. Marey and Bull developed a close bond, the archetypical mentor and protégé relationship. During the early days of their collaboration Marey would send Bull out onto the streets of Paris with his patented chronophotographic camera to record footage of people and animals in motion. Marey would then overlay overlapping celluloid images in order to study the phases of movement of the subjects. Bull soon mastered the tools and techniques of his new trade, and was always looking for new ways to improve upon them.

A fast learner he developed a new, automated system for capturing slow motion cinematography in 1902, but began to focus primarily on high speed photography afterwards. While a far cry from the work of the scientists of the California Institute of Technology today, Bull’s first camera was capable of recording 500 images per second, a feat nevertheless unequalled at the time.

Over the next half century, he continued his work and in 1952 he could boast of having created a device that could record more than 1 million frames per second. Marey died in 1904. Bull became the head of the Institut Marey and improved upon his chronophotographic gun creating a new model that didn’t require the cameraman to stop the film in order to expose it. This allowed for continuous recording and the new device was capable of recording up to 1,200 frames per second.

One of his most iconic films depicting a fly in mid-flight dates from this period. It also proved possible to capture images of ballistics and projectiles, and some of his surviving footage includes a film of a bullet piercing a bubble.

His passion for inventing also found outlets in other fields and in 1908 he invented an electrocardiograph, the device used to measure the rhythm of a patient’s heartbeats. Later, during the early years of the first World War, when it looked as Paris itself might fall within range of German guns, Bull’s experiments with sonic phenomena allowed him to create a device capable of locating artillery emplacements through sound waves.

From the 1930s onwards he divided his time between Great Britain and France, earning accolades in both jurisdictions, including a CBE (commander of the Order of the British Empire) and the Légion d’honneur. He was appointed the head of research at the National Office of Research and Invention in France in 1933 after receiving French citizenship two years earlier. He was later appointed president of the Institute of Scientific Cinematography in 1948.

Bull died in 1972 at the age of 96, having lived long enough to see the technology he pioneered play a profound role in transforming how we communicate, express ourselves culturally and how we understand the wider world. No doubt it must have seemed a far cry from the halting images he first recorded on the streets of Paris at the end of the 19th century.