The controversial Christmas tradition of blackface in the Netherlands 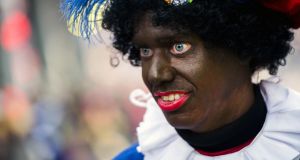 Zwarte Piet is the companion of Saint Nicolas during a yearly feast celebrated on the evening of December 5th. Photograph: Remko de Waal/AFP/Getty Images

As a 20-year-old student, I was exhilarated to find out I was going to be spending my Erasmus year in perhaps one of Europe’s most liberal, modern thinking cities, Amsterdam. This, paired with the prospect of moving away from my parent’s semi-detached house in suburbia, had me packing my bags months before departure.

The first few weeks of the exchange disappeared in a flurry of new faces and red wine. I was making the most out of my new life. I had a weekly radio show and a bunch of cool new friends; it was all I wanted from such a progressive city. Before any of us could fathom, it was Christmas time. Lights were draped across bare trees, Pepernoten cookies were stocked on the shelves, and young white children were dressed up in black face.

The act of dressing in blackface stems from the Sinterklass holiday which takes place on December 5th each year. At first glance the celebrations seem identical to that of an Irish Christmas Day. Gifts are exchanged, Sinterklass (Saint Nicolas) delivers presents to the children, and time is spent with family. Yet it is not all a fairy tale; there is a stark difference of opinion on the tradition.

Sinterklasses helper is Zwarte Piet, or Black Pete. Black Pete first appeared in a children’s novel by Jan Schenkman, written in the mid-10th century. His duty was to reward the good kids with treats, and punish the naughty ones. This was done by either beating them with a chimney sweep, or throwing them in a sack and shipping them off to Spain.

Zwarte Piet is seen as a representation of Dutch colonial history and slavery, particularly in his appearance. The fact that he is a Moor, followed by the way he dresses, is a reference to the colonisation that took place.

In 2015, a United Nations Committee on the Elimination of Racial Discrimination urged the Netherlands to ditch the tradition of Zwarte Piet, after publishing a report which found that “the character of Black Pete is sometimes portrayed in a manner that reflects negative stereotypes of people of African descent and is experienced by many people of African descent as a vestige of slavery”.

The Dutch government refused to ban the tradition but said it would encourage discussion and debate, even if “uncomfortable”, about racism.

In recent years, anti-racism protesters have demonstrated at parades with blackface all around the country, while white extremists are using blackface as a means of protesting against immigration.

I met my first young Zwarte Piet at a vintage clothing shop. I was rummaging through the rails attempting to find a winter coat that met my student budget when a young child emerged from the curtain of clothing. He was kitted out in Moorish dress, an afro wig, large creole earrings, big red lips and was smeared with black paint from head to toe.

Later that week my station manager told me about the Zwarte Piet tradition, explaining how it divides the Dutch population between those who associate it with racism, and those who see it as a harmless custom. I was intrigued and decided to focus my next podcast on the arguments for the pro and anti-Zwarte Piet sides.

Speaking to those who support the tradition, I heard their main argument for defending the custom is that Piet is a fictitious character who is just part of a ‘children’s holiday’. But after interviewing Larice Schuurbiers (lariceschuurbiers.nl), an anti-Zwarte Piet activist and photographer, I learned how this tradition is merely a catalyst for a much larger conversation, tackling institutionalised racism which has accompanied the refugee crises, and the Netherlands’ unaddressed colonial hangover.

When Zwarte Piet is removed from the protection which tradition offers him, the racist connotations carried within the custom become undeniable. The transformation of Dutch society can be seen through the evolution of the people’s intolerance toward Zwarte Piet.

In a world which is becoming ever more cosmopolitan, tradition and custom must develop in accordance to this progression. Yet, it must do so in a way which does not eradicate culture. As ugly as the Zwarte Piettradition may seem, questioning something that has become a cultural norm is fraught with difficulty.

As an Irish person, I am proud that we have been confident enough to confront many once taboo subjects, most recently by legalising same-sex marriage for example, which has allowed our nation to grow stronger. I have no doubt that this will eventually also be the case for Dutch society, allowing for the celebration of tradition but leaving all prejudice behind.

Listen to Aoife Doran’ podcast on Zwarte Piet at mixcloud.com/A_ife/pr%C3%A1ta%C3%AD-episode-6-the-zwarte-piet-tradition/