My first Christmas in Canada ... Blizzards, stomach flu and a lot of prayers

But there’s a happy ending, we promise 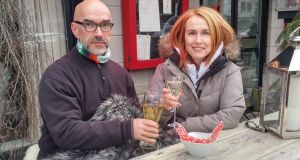 Mike and Pauline first met at Christmas in Canada 33 years ago.

August 1984 found me at Calgary Airport, waiting to be met by a complete stranger who was about to become my new boss. I had jumped at the opportunity to “see the world” offered to me by a colleague who had worked in Canada and still had connections there.

“The world”turned out to be a small town outside Calgary, renowned for producing chuck wagon drivers for the Calgary Stampede.

Living there was a culture shock, in a way that I don’t think is possible today, when the world is so interconnected by the internet. It was a time when you still wrote letters to friends and only phoned home once a month, on a Sunday after six, because it was cheaper.

Luckily, I was put in contact with another Irish expat, Jackie, who was living in another small town not too far away. She welcomed me into the small circle of friends that she had gathered since her arrival a few months previously.

December rolled around and, of course, there was no thought of going home for Christmas. I had really only just arrived and people didn’t fly around with the same nonchalance that they do nowadays. Jackie, who was a skiing enthusiast, suggested that a group of us drive down to Whitefish in Montana to ski.

I had only just learned to ski and was not entirely sure I enjoyed it, but given my choices, staying alone in my little room at the nurses’ residence, or going skiing with a great group of people in Whitefish for Christmas, there really wasn’t a lot to debate.

So, we set out after work to drive south from Calgary. There were five of us in two cars: Jackie’s boyfriend Tom, his son John, and Jackie’s friend Ann, who had flown over from Ireland specially for this ski trip. Along the way, in Lethbridge, we met up with Mike, a co-worker and recent transplant from Canada’s east coast who was not planning on flying home for Christmas either. He was glad of the invite to join us on our adventure.

We stayed overnight in Lethbridge and got an early start as we planned on driving the rest of the way to Whitefish that day.

Mike was not feeling well as we left Lethbridge and as we drove south he became progressively worse. By the time we reached the US border, he really needed a restroom. There were cars in front of us proceeding through the border control process, but Mike couldn’t wait. He hopped out of the car to make his way to the office to find a washroom.

This did not sit well with the the vigilant border control officer who, no doubt suspecting some sort of attempted illegal entry was in progress, bustled out of his office and started yelling at the unfortunate Mike to get back in the car. Mike tried to explain why he needed to get out, but our stalwart officer was not prepared to break with protocol, and when he started to reach for his holster, Mike decided to beat a hasty retreat back to the car as ordered. We processed through the border without further incident and needless to say Mike was very relieved.

The road was not clear and the visibility at times was non-existent. I had never seen anything like it. I was in the lead car with Tom, John and Mike. Tom obviously had great confidence in the driving skills of his teenage son as he allowed him to drive through the blizzard. John, who had probably had his driver’s licence for all of a year or two, was actually enjoying himself. The windshield wipers were useless and John at times was driving with his head stuck out the side window to get a better view of what was ahead.

The hapless Mike, still unwell, needed to throw up. He shouted at John to stop the car. John didn’t quite understand the imperative nature of his demand and blithely continued on. Not wanting to vomit in the car Mike threw his door open, stuck his head out of the car as it was still moving, and emptied his stomach. John hit the brakes. Jackie, coming behind us in her car, had to swerve to avoid tearing the door off Tom’s car and decapitating Mike at the same time. Her car got stuck in a snowdrift and we all had to get out and push her car out so that we could continue.

Back in the backseat, as we drove forward into a complete whiteout, I did the only thing I could do. I prayed. I prayed with a fervour only a saint could hope to emulate. I prayed harder than a legion of Irish mammies and grannies at exam time. Decade upon decade of the rosary floated Heavenward through the snow laden skies.

Our Father who art in Heaven, please get me off this mountain in one piece… Hail Mary full of Grace, why did I ever come to this horrible country… Holy Mary Mother of God, if I make it out alive, I’m finding the first airport I can and I’m going back to Ireland.

My prayers were answered and we made it through the pass. We stopped at a small cafe to fortify ourselves and found out that the road we had just navigated had been closed just after we had set out as it was considered too dangerous for cars because of the blizzard.

We arrived in Whitefish, happy to have survived and looking forward to skiing. Then we each of us in turn came down with the stomach flu.

Now, it’s 2017 and Mike and I are celebrating our 33rd Christmas together. Strong bonds are forged in misery and terror and if we could survive our first we can survive anything.