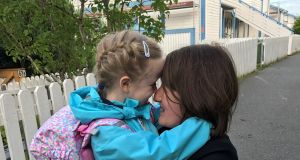 Carmel Stelzner with her daughter Nora on her first day of school in Oslo last week.

My daughter Nora started school in Oslo last week at the age of five and three quarters. She had her big new rucksack and matching lunchbox, pencil case and water bottle, proudly shown off to anyone who has visited the house since June.

Oslo has been our home for four years, after my German husband got offered the opportunity to relocate here from London, where we had been living. We saw a chance to jump off the hamster wheel of stress that life in London had become.With two small children, we were always chasing family time while juggling work, travel and long hours.

Our quality of life is great here as we have aligned with the Norwegian values of a healthy, family oriented work-life balance, combined with lots of time in the great outdoors. Last week saw another milestone for us when Nora joined her big brother in our local school here on the outskirts of Oslo.

Off we went on Monday morning to the opening ceremony for new starters in the school gym. My husband had the day off work in honour of the occasion because his employer, like many here, gives a day off for that milestone day that you send a child off into the school system. It’s a very nice touch. We had a lovely lunch together followed by a trip to the local garden centre to buy plants and seeds to sow to mark the day.

Children start school here in the year they turn six, so the boisterous bunch of kids turning up with their parents was ready and eager.

Given that we live in an area of Oslo with very high immigrant population, it’s no surprise that the majority of kids going to our local school are of immigrant backgrounds. Sitting in that gym last week, it was a surprise to see the degree to which Norwegians had become an ethnic minority, almost to the point of non-representation. Most of the children had Pakistani, Turkish, East African, Romanian, Vietnamese and Polish backgrounds.

Many of them were born here, but Norwegian is their second language. Our kids have Irish/German backgrounds and speak English, so we are all in good company. This, in itself, is not a problem as the teaching is excellent and the children learn Norwegian at school, as well as how to behave in accordance with Norwegian societal rules and values.

To me, the challenge is when Norwegian is not just their second language but also their second culture. Can these kids really have a long-term sense of belonging here in Norway when they have little or no chance to befriend ethnic Norwegians of their own age, to go on play dates to Norwegian houses, to eat Norwegian evening meals, to learn the vital social rules such as saying “Takk for maten” or thanks for the food, every time they rise from the table after a meal?

When it comes to school selection for your children, there is free choice here. In my experience, Norwegian society is incredibly welcoming to immigrants, but there is a tipping point in the school system, at primary level at any rate. Up to 50 per cent immigrant kids is fine and seen as giving enriching cultural exposure in all directions. But if you slide past that halfway mark, understandably, Norwegians start to move their kids to other schools because most don’t want their kids to be in a minority in their own country.

With a general election coming up here in Norway next month, integration is a hot topic, and there has been much talk in the media about tackling immigrant dominance in schools, with one idea being to “bus” kids with migrant backgrounds to other areas of the city where the cultural split has a healthier Norwegian bias.

I am not going to propose a solution, but it’s a big issue worthy of consideration, and not just in Norway. What western governments want is fully integrated immigrants contributing to society and embracing the indigenous culture. If you have suburban areas of a city where there are blocks and blocks of new apartments with only immigrants moving in, the best case is that you will have functional immigrants, but not integrated ones. The two-tiered society that this divide creates will likely be a big problem down the line.

From a cultural integration perspective, we have it easier than many of our fellow immigrants because we speak English, which almost all Norwegians understand. With a similar European cultural background (as well me being a talkative Irish person), we have been able to reach out, and all four of us have made some great Norwegian friends.

I’ve learned Norwegian, and my husband is doing so too. The kids speak it fluently, and after four years have a strong sense of belonging here. Although proud of their Irish/German/born-in-London heritage, the roots of their cultural identity are now firmly tied to Norway.

In terms of other immigrant children in our school, the educational authorities are offering free Norwegian language classes to parents. It is recognised that parents need to be able to speak the language and communicate outside of their own ethnic circle. This is vital for kids to really and truly “live” in Norway, both at home as well as at school.

And back to our little school starter: one week in, she is loving her big school. The plants are being watched carefully on a daily basis as she and they flourish in tandem. Tired of the big brother annoying her by saying it was his school, she is very happy to be able to finally call it her school. After all, when you are five and three quarters, there is nothing more annoying than a big brother with a sense of entitlement.

Carmel Stelzner blogs at midlifemigrant.com about family life in Norway.

Michael Harding: I was in my underpants, finishing off the pint...
Real news has value SUBSCRIBE