‘Days before opening night, I got that dreaded phone call from home’ 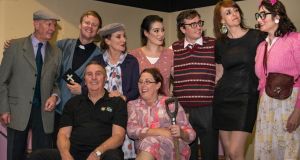 Shannon Murphy (centre back in pink) with the Irish Theatre Players in Perth.

As a make-up artist, I am usually more comfortable behind the scenes than on stage. But two years ago, after six years living in Perth with my Irish husband, I saw a post for auditions with the Irish Theatre Players advertised on the Irish Families in Perth Facebook page. I’d never acted in my life, but figured I’d give it a go.

To my surprise, I was cast as one of three leading women in Last Bus to Contrition, by Noel O’Neil.

I loved going to rehearsals at the Irish Club of Western Australia, in the suburb of Subiaco. I was making friends for life with my cast mates, and I felt I belonged up there on the stage. It was such a thrill. My family and friends were impressed by my sudden interest in acting, but weren’t too surprised as I’ve always loved theatre and musicals.

But my first experience on stage in front of an audience for this production was not to be. Mid-rehearsal, just days before opening night, I got that dreaded phone call from home. My dad had passed away unexpectedly.

I was distraught. That day was a blur, but what has stuck with me is the kindness the cast and crew showed me.

I managed to make it back to Ireland within 24 hours. Perth is 15,000km from where I’m from, but being able to get back home so quickly at that time was one of the biggest reasons why I’m likely to stay in Perth for a long time, if not for life. If I could manage to get home in such haste for the most urgent moment in my life, I could take whatever the world threw at me.

The Irish Theatre Players sent the biggest bunch of flowers I’ve ever seen, which were there waiting for me. The flowers made it to my front door in Ireland before I did.

I was home for two weeks, organising the funeral and spending time with my family. All the while, behind the scenes, the Irish Theatre Players were cancelling shows, refunding tickets, and dealing with general production issues because I couldn’t be there.

I wanted to give back to them, so on my return I joined the committee, offering my organisational and make-up skills. At a meeting, I learned the Players had lost AUD$5,000 by cancelling that show. I wanted to help recoup some funds; as stupid as it sounds, I felt a little responsible.

The first step was to fundraise for the Irish Club of WA, as they were going through some financial issues, and if they closed, our theatre club would too. I organised two successful table quiz nights there, and collectively with the cast, committee and friends, raised close to $12,000.

While I was pregnant with our first child, my husband Aidan made his debut on the Perth stage. We are both now hooked on the acting buzz. Sienna was born in May last year, arriving three and a half weeks early while I was teaching ballroom dancing for our first annual Ballroom Blitz dancing competition. I had her on the Monday, and was back in the theatre by Thursday.

When both Aidan and I were cast in the one-acts last year, Sienna was wrapped to me while I rehearsed on stage with my cast mates and understanding director. Sienna is growing up there.

People say it’s hard when you have a baby abroad, away from family, and it certainly can be at times, but with friends like the ones we’ve made at the ITP, it’s so much easier. Our daughter has many adopted aunties and uncles there.

If it wasn’t for the ITP, the Irish Club and the amazing friends we’ve made through both, we may not have stayed here in Perth.

If you are involved with an Irish group or organisation overseas and would like to tell us about it, email abroad@irishtimes.com.