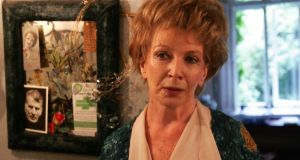 In the field of arts, culture and sport, the winners are the authors William Kennedy and Edna O’Brien. Photograph: Frank Miller

Novelist Edna O’Brien and Irish-American Pulitzer Prize-winning author William Kennedy are among 10 recipients of the Presidential Distinguished Service Award for the Irish abroad announced on Wednesday.

Tánaiste and Minister for Foreign Affairs Simon Coveney announced the names of the award winners for the scheme established by the Government following the 2011 Global Irish Economic Forum as a means to recognise the contribution of members of the Irish diaspora.

In the field of arts, culture and sport, the winners are the authors Kennedy and O’Brien.

Prof Munira Hamud Mutran of the University of Sao Paulo, a pioneer in developing Irish studies in Brazil, and Dr John L Lahey, a leading figure in the Irish American community in New York, will be given the award for services to business and education.

Until his retirement in 2018, Dr Lahey was president of Quinnipiac University, where he developed the Great Hunger Museum and Institute in 2012. The museum is home to the largest collection of Famine-era material and Dr Lahey facilitated the display of the collection in Dublin, Cork and Derry this year.

Sr Bridget Tighe was named in the charitable works category. Sr Bridget is from Ballindoon, Co. Sligo and has served in the Middle East for more than 25 years. She is currently based in Palestine and her work is focused on “support for the Palestinian people, providing care to the most marginalised, often in extremely difficult conditions”, according to her award biography.

The late Tom Power from Australia, Edward J Ward in the US and Breege McDaid in Britain will be given the award for their contribution to Irish community support.

Ms McDaid, from Buncrana in Donegal is director of Irish Community Care Merseyside. The centre caters for people of Irish birth or descent, including Irish Travellers, across Merseyside, west Cheshire and Wigan.

In the peace, reconciliation and development category, the award is made to Sr Mary Killeen in Kenya. Sr Mary arrived in Kenya in 1976 and leads a diverse programme of education, health, and community services in the slums of Makuru, home to over 600,000 people.

Limerick-born Prof Margaret Murnane will be given the award for the science, technology and innovation award, which will be presented to her in the US.

Prof Murnane is regarded as being one of the leading optical physicists of her generation.

She is Director of the National Science Foundation STROBE Science and Technology Center on functional nano-imaging, a fellow at JILA and Distinguished Professor at the Department of Physics and Electrical and Computer Engineering at the University of Colorado.

President Michael D Higgins will present the awards on Thursday.

“I am delighted to have the opportunity once again this year to formally recognise the achievements of some of the finest members of our global family, our diaspora,” Mr Coveney said.

“The diverse contributions of these individuals extends across six different categories. Through their work, they contribute to building an invaluably positive image of Ireland and Irish people around the world.”

“This is the seventh year in which recipients have received this award, and the ceremony remains a very important opportunity to acknowledge those who have contributed to realising Ireland’s place as an island at the centre of the world.”

There were 148 nominations considered for the 10 awards this year. Mr Coveney said the level and breadth of the achievements of the people nominated was “outstanding”.

The first awards were made in 2012. In order to be eligible for consideration, nominees must be habitually resident outside the island of Ireland and and they must satisfy a number of other requirements, including that they have rendered distinguished service to the State and/or its reputation abroad.

Nominations were made by Irish communities abroad through the State’s diplomatic missions.