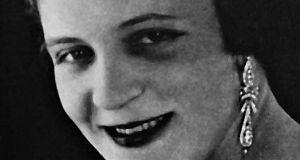 Monica de Wichfeld - a woman who refused to conform

If Monica de Wichfeld’s life was a movie, it might win one Oscar for costume design, and another for best actress.

An aristocratic mainstay of the European scene in the 1920s and 30s, wintering in the Mediterranean and keeping company with some famous socialites including playwrights Noël Coward, Clementine Churchill and Tallulah Bankhead, she wore haute couture, and boasted a vast estate in Denmark and an aristocratic husband.

The reality of Monica’s life was far more turbulent than appearances might have suggested; and all the more interesting for it.

Monica was a rebel - a difficult child”

Born in London in 1894 to John and Alice Massy-Beresford, she grew up on their large estate in Co Fermanagh, the daughter of a long line of Anglo-Irish and Scots aristocracy. Her adult daughter would later remember her reputation among the family: “Monica was a rebel - a difficult child.”

She was expelled from a number of schools until taken in hand by a private Scottish tutor, a disciplinarian who recognised Monica’s restless intelligence. Her taste for adventure led to her assisting her father transport guns during the Larne gun-running in 1914.

The first World War took her to London, where she worked in a soldier’s canteen. Her brother, Lieutenant John Clarina Massy-Beresford, was killed in action in 1918.

In 1916, she married Jørgen Adalbert Wichfeld, a Danish aristocrat with a large estate in Lolland. Despite appearances, the couple were not wealthy and it fell to Monica to try and manage the estate’s failing fortunes. The stock market crash of 1929 further undermined the de Wichfeld fortune, and they retreated to Monica’s mother’s home in Rapallo, Northern Italy.

From here, Monica departed for Paris and launched a line of beauty products, scents (including one for Coco Chanel, called Monica 5), and costume jewellery which did something to revive the family’s finances. Monica’s design activities contributed to her glamourous air and kept the de Wichfelds - in appearances at least - on a level with their aristocratic peers.

But despite playing the part with skill, Monica never quite fit the society lady template. On the eve of the second World War, she moved from Paris to Italy, where she immediately began gathering intelligence and sending it to Britain via the US.

Expelled from Italy in 1941, she and her family made the perilous journey to occupied Denmark via Berlin, gathering intelligence all the way. Disgusted by her fellow aristocrats’ complacency to Nazi occupation, she began to take action, including securing funds for the resistance movement, concealing weapons and explosives, training resistance fighters and pushing the Danish resistance to provide safe passage for Jewish families.

In 1942, under torture, her comrade in the resistance Jens Jacob Jensen revealed her name and she was arrested by the Gestapo, saying: “I have joined the struggle for Denmark. I am willing to pay the price.”

She was initially sentenced to death along with 10 other resistance fighters. The sentence provoked a huge outcry among the Danish people as she was a woman, and so was commuted to life in prison. Monica, however, refused to accept the sentence unless it was applied to the 10 others on trial.

Despite her efforts, Monica was sent to a POW Camp, and ended her life in Waldheim Prison, where she died of tuberculosis two months before the end of the war. The whereabouts of her remains are unknown.

Much has been made of the loss of Monica’s brother (fondly known as Jack) and its effect on her attitude towards the German people. However, it would be simplistic to dismiss her brave actions during the second World War as simple vengeance.

Monica was a complex and intelligent woman who for nine years in the 1920s had conducted a passionate affair with Kurt Reventlow, a Danish aristocrat of German descent who had fought for the Germans in the first World War. One of her great disappointments was that Kurt eventually decided to move to the US as war broke out rather than becoming involved in the Danish resistance - taking the easy way out in Monica’s opinion.

This would never have been an option for Monica de Wichfeld; a woman who refused to conform to society’s expectations, and a rebel to the end.

This Extraordinary Emigrants article was written by Jessica Traynor, deputy museum director of EPIC The Irish Emigration Museum in Dublin’s Docklands, an interactive museum that tells the story of how the Irish shaped and influenced the world.

‘I’m going to ask you something,’ Sorcha goes, ‘Have you two been sleeping together?’
Real news has value SUBSCRIBE