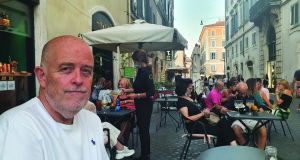 Finbarr O’Curráin is a director of a UN agency with a headquarters in Rome. He lives in an apartment in the Testaccio area, one of the last residential neighbourhoods in the Italian capital’s historic centre, wth his wife Sheila Dunne and their three sons Conor, 25, Oisín, 23 and Lorcan, 17

It was clear from Gianni’s face that he was irritated by my disapproving glare. One minute he had been listing - through his mask - the dishes of the day, the next, he was scurrying off to embrace a couple and their children sans mask. This was our last meal, before Rome’s third lockdown, following its designation as a “red zone” due to a new surge in Covid infections, seemed imperilled.

“La famiglia,” he snapped by way of an excuse when he returned. “The family”. Spending the past three decades in Rome has enabled me to decode it. Any rules, risks or restrictions that could cause stress to ‘la famiglia’ serve simply to reinforce it. Switching his attention to my wife - la mamma, the lynchpin of any Italian family - Gianni explained that the couple were his brother, wife and their children, as if this proved there was no risk.

Family can be trusted seemed to be the explanation. Abandoning our table, after such an explanation, caused major offence.

The pandemic has stressed Rome as only barbarian invasions have. The annual flood of over six million tourists has dwindled to a trickle of the few willing to risk Covid-tested flights which are available in only six international locations and who then find accommodation.

The Fellini-ish feel of the historic centre has dissipated, restaurants have lost that frenetic buzz, the morning café ritual has drifted towards the anti-social US model of “to-go”, while the once-thronged piazzas have been all but forsaken, with high-profile police patrols intimidatingly placed at traffic choke points. For the first time, you can almost hear yourself think in and around the now eerily silent Roman landmarks.

Even more extraordinary is how the typically rule-indifferent, but health obsessed Romans have become model practitioners of social distancing, while the oft-mocked Anglo-Saxon queuing fixation is scrupulously mimicked. The closure of restaurants has forced reluctant hands to struggle with the nuances of Italian cooking that elude all but the most dedicated: after hundreds of failed attempts.

Even a foreigner (any non-Roman) with patient coaching from vegetable stall owners, now with more time than customers, can cook artichokes (carciofi) as succulent as any third-generation Roman can. This kind of attention, mirrored in tourist-abandoned restaurants and even from neighbours, is a significant change in Rome. It seems that straneri (foreigners) who stuck with Rome, sharing the risks and privations, have become somewhat distant famiglia, but famiglia nonetheless. And family means everything.

Romans are also rediscovering their own city and their communities. Having long avoided tourist hotspots, the absence of tour buses with their hordes of gaudy tourists has reawakened suburban Romans’s sense of awe with their great city. You can now take time to contemplate the marvels of the Pantheon or the Colosseum without being buffeted by endless streams of over-eager visitors.

Before the latest lockdown, one could still enjoy lunchtime dining with a restaurant service that had evolved into a welcoming and unhurried experience. Now the dining experience is restricted to “take-out” packs but in the style and with the respect for food that one would expect from Italians And these are now available from even the most exclusive restaurants.

La famiglia has been a social anchor for the Romans, keeping isolation from the door and government rules forbidding family gathering have been overlooked on a “don’t ask, don’t tell” basis arguably assuaging mental health issues. And that anchor has been extended, particularly in the inner-city communities, which are re-emerging to neighbours - even long-term foreign residents, like me, who have failed to master the language, beyond a few mumbled salutations.

Yet la famiglia has also become an anchor weighing down hospital services with increased rates of infection being linked to domestic and social transmission. With the vaccine rollout struggling to rise about a 100k a day, it is not only hospitals that are suffering. A pre-lockdown stroll down via Nazionale, a premier shopping street, told a sad economic tale.

With more than one-quarter of the commercial premises shuttered and an absence of shoppers parading premium brand bags, images of tumble-weed rolling in between the trickle of cars on a five-lane street that was normally a pulsating paradise for shoppers came to mind.

At first glance, it seems that “all has changed, changed utterly”, but unlike Yeats’s Dublin of 1916, the impact of the crisis on Rome is a rebirth and extension of the beauty of la famiglia. The “too long a sacrifice” under lockdown far from making “a stone of the heart” has in this unique European capital city that has resisted cosmopolitanism, despite its long history of extreme tourism, rekindled its sense of community.

Two decades ago, long before pandemics and takeout menus, the same Gianni use to send his sons to our house with take-outs whenever I was travelling, and my wife was alone with young kids.

Now, though we have moved far from his restaurant, we still order his take outs - despite the adverse impact of the delivery time on the food: because Gianni is family, and family embrace each other in times of crisis.