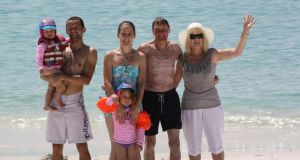 Have you ever been winded, the breath sucked from your body? You’re powerless to get it back. Nothing you do has any impact. You feel you need to do something to survive, but all you can do is wait.

In August 2015, after 16 years in Australia, our family decided we would return to Ireland the following year. My wife Anne-Marie’s mother Liz must have felt things were coming together after a tough few years. She had her first “made in Ireland” granddaughter, and now some prodigals were on their way back to add to the growing brood.

Always excitable and lively, she spent the next few months planning, fussing, anticipating, fussing, shopping and err . . . fussing. She and Anne-Marie talked more as our arrival got closer. Liz was in her element, getting our house furnished with the basics.

The countdown was on our fridge in Sydney. Each morning the kids tore a sticker off: “78 days to go” became 77, then 76 and so on. Somewhere in the 70s, Liz discovered a lump. In the 40s, there was a diagnosis. Cancer, again – but it was treatable and the doctors were positive. We had been here before.

Finally, May 10th arrived. We landed in Dublin. Being one of seven children makes for big homecomings. Liz had good and bad days but her prognosis was still recovery. The summer stretched ahead of us. We planned to take care of her after her operation. We were ready.

But gradually the bad days outnumbered the good, and on July 4th, exactly eight weeks after our own departure from Sydney, Liz departed this life. Unlike her husband Oliver before her, who died while we were still in Australia, she was surrounded by all her children.

Death is our common experience. This scenario is not unusual; it happens every day. But the ease with which we celebrate birth is matched by the difficulty we have in dealing with, and talking about, death.

For those involved, death is no less painful for its regularity. The obvious thoughts and feelings surface. The natural reaction is to feel robbed – for Liz and ourselves. Her time with grandchildren was stolen after years of patient longing. This was unfair – mostly for Liz, but also for our kids. What the hell are we here for, except family?

We did whatever we could to cope. We looked at the bright side. “At least we’re home. We had time to support Liz, to say farewell properly. We’re with family.”

Anne-Marie’s brother Marty reassured us that Liz had had a wonderful year looking forward to seeing Anne-Marie and her grandkids. This was strangely comforting and unsettling at the same time. Liz had a precious few weeks where the sun shone for all of us.

I have not lost many loved ones. Liz’s funeral was only the second time family from both sides had got together since we arrived home – and a stark contrast to the first. It was not something we had envisaged. Time with Liz was one of the reasons we returned.

I wondered how Anne-Marie felt and whether it changed her mind about the decision we had made to move home. But, for her, it reinforced the rightness of the move. She was where she belonged, with her sister Kathy and brother Marty.

I read recently that happiness comes from the right balance of pleasure and purpose. The pendulum had certainly swung from pleasure to purpose. We resolved to be there for one another and for our family.

Over the following weeks and months, we were busy. Thankfully, we had kids to settle into school and their new life. I started work. Life must go on. Marty welcomed his new baby into a different world to the one he had imagined. Anne-Marie’s family rallied around. Everyone shuffled onward, one foot in front of the other.

Having left lifelong friends in Sydney, we worked on re-establishing our relationships here. Anne-Marie got great support here and from her good pals overseas. We spent quiet time in Tipperary.

Winter arrived quickly, bringing several “firsts” for the kids. We had Halloween and then a “proper” Christmas.

It is hard to believe it has been 11 months since we moved back, and that most of our time here has been without Liz.

I shed a few tears writing this, a healthy thing. Being overseas, away from loved ones, we can suppress feelings, believing it protects us. As much as I try be positive, it’s hard to shake a sense of injustice at lost time – but it was our choice to be away. We’ve been badly winded, but we’re no longer doubled over. Our breath is returning to a normal rhythm but we won’t forget the hit we took.

James Parnell is writing a series of articles on his experience of returning to Ireland after 16 years in Australia for Irish Times Abroad. He is the founder of TheWellBeingGym which provides corporate performance training to businesses, and personal life design coaching to individuals. He blogs at james-parnell.com.