We watched Oliver’s funeral on Facetime from Australia 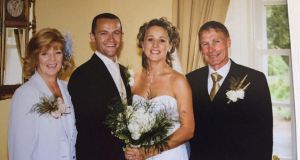 James Parnell in happier days with Anne-Marie, Oliver and Liz: Facetime suffices only when times are good.

The first visit of my wife’s parents to Sydney coincided with our own first arrival when our daughter Ava was born in 2008.

During that visit from Anne-Marie’s parents Liz and Oliver, the girls spent quality time together, while I took my father-in-law to see the Great Ocean Road, which is a breathtakingly scenic stretch that goes for 243km along the southeastern coast of Australia between the Victorian cities of Torquay and Allansford.

When they were back with us in 2012 on their last visit together, Sydney put on its usual show and we made some more lovely memories.

Shortly after that, however, Oliver fell ill. It didn’t seem serious to begin with but his condition deteriorated.

We visited Ireland late the following year, but within a few weeks of arriving home in Sydney, Anne-Marie had decided to go back to Dublin to be with him.

By then we had three young children. So she flew back with our youngest, JJ, while I remained in Sydney with the two girls.

Anne-Marie spent a few treasured weeks with Oliver. During this time, her grandmother passed away at a “good age”. She had lived with them for years and had formed a special bond with Oliver. He was heartbroken his pal was gone. He helped Anne-Marie prepare to read a favourite poem of his at Gran’s funeral entitled Death is Nothing at All by Henry Scott-Holland.

Shortly after that, Anne-Marie’s sister Kathy got married. (We still have the life-sized cardboard cut-outs of Ava, Erin and myself that I sent over so we could be at the wedding – anything to be part of an Irish hooley. I seem to recall my cut-out being asked to dance more than I normally would.)

During her time in Dublin, Anne-Marie took care of Oliver at home taking him out when he was up to it. He got great joy out of JJ, who was just nine months old, particularly the daily wheelchair versus walker races.

As Christmas approached, it was decided that Anne-Marie and JJ would return to us for the holidays. As I write this and reflect on everything, I really don’t know how she coped.

She was grateful to have been able to spend every waking moment of the last few weeks with him but this was the final goodbye.

Every airport goodbye, as all emigrants know, is a heart-wrenching experience even in happy circumstances, but this was not “au revoir” or “bon voyage”.

They both would have known that in their hearts. Anne-Marie would neither see him again nor be with him when he passed away.

Ten days later, on December 26th, we got the call we had been expecting and dreading: the one every emigrant fears deep down; the possibility we dare not dwell on because to do so would hurt too much. We had been in perpetual motion for months. Now having spent the most precious time with Oliver when he was alive, Anne-Marie stayed in Sydney. The choice had been made a while ago. It was the price to pay for those weeks spent with him.

So two days later we ushered the kids to bed and Facetimed home. We watched Oliver’s funeral from afar. We had set up our own little shrine in the kitchen but it seemed like a poor effort. Death is Nothing at All was recited again. We truly “felt the distance”. This was insufficient, if not unfair. Facetime suffices only when times are good. We made a desperate effort to be part of the farewell. But the more we tried to close the gap, the wider the chasm seemed. We consoled ourselves with having done the right thing, but there was little solace.

In the weeks and months that followed, we were again busy with the kids during the Australian summer. Mourning feels different overseas; inadequate and incomplete. Out of sight is more likely to be out of mind. Your loved one has not been part of your everyday routine. This remains largely unchanged – if not unaffected – by their passing. You almost wish something would change visibly. But the differences are not visible.

In some ways, we suppress the feelings around bereavement just as we do with those around emigration. It’s probably not healthy.

Having returned now to Oliver’s home town, I notice how often I’m prompted to think of him in Dublin compared with Sydney. Fleeting moments, a sight or a person will trigger fond memories. And I’m glad of it. He was a great role model. There have been plenty of times over the years when I’ve asked myself, “What would Oliver do?” when trying to decide what’s right. Just as my father has a good compass, so too did Oliver.

After Oliver’s passing, Anne-Marie appeared strong as always and I thought she was coping well. Later she told me she had put on a braver face than I had thought: “You try to console yourself with thoughts that he was so unwell, and in such pain . . . but all you want to do is punch a wall and shout No!”

When you are in the eye of a storm, in the midst of chaos, you are focused only on putting one foot in front of the other.

For her, this may have been the moment the pendulum shifted permanently. Less than two years later we decided to return to Ireland. While making that decision, Anne-Marie mentioned she would never wish for anyone to go through what she had. The distance is too great.

In August 2015, we told our families we would be back the following summer. Liz was beside herself. Our next chapter was about to begin. The road stretched out in front of us. Little do we ever know what’s around the corner.

James Parnell is writing a series of articles on his experience of returning to Ireland after 16 years in Australia for Irish Times Abroad. He is the founder of TheWellBeingGym which provides corporate performance training to businesses, and personal life design coaching to individuals. He blogs at james-parnell.com.

Meet gentle George the chicken dog and his hentourage
4