Irish in Berlin, boating in Hawaii, and Irish passport applications 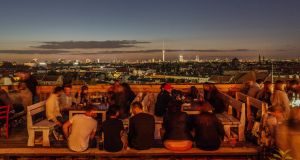 A group of Irish artists in Berlin will host a new festival from June 22nd to 24th to explore what is ‘stuck in their craw’ about Ireland. Photograph: Andreas Meichsner/The New York Times

What’s “stuck in your craw” about Ireland?That’s the question we’re asking Irish Times Abroad readers this week ahead of an Irish arts festival in Berlin, Craw, which is exploring that very topic. In our most-read story this week, festival co-founder Dee Mulrooney explains her reasons for moving to the city: “We felt Ireland forced us out, we felt betrayed. I worked as a teacher for 20 years, my husband a carpenter, but we struggled to find somewhere to live. To survive we had to leave.” Her fellow co-founder Candice Gordon says there is so much about Ireland that she loves, but she gets “an overwhelming suffocating feeling there, like there’s no room to move, experiment, create.” Irish Times Abroad is media partner for the festival.

Last year Kevin Clancy and his partner Vicki got the devastating news in Sydney that their baby would not survive in the womb, and experienced a miscarriage. Then, they “got the call every emigrant fears”; Kevin’s father was dying in Ireland. He writes about attempting to pull their lives back together in Australia after double trauma.

Fancy a life in “shorts, a T-shirt and flip-flops day and night”? Eamon Guilfoyle retired from his IT job at 54, and headed off to the Caribbean and Hawaii to work as a captain on a dive boat. He tells us why and how in this week’s Working Abroad Q&A.

It’s not only people of Irish descent living in Britain who have been prompted by Brexit to apply for their Irish passport for the first time. Irish-American Séan Bailey shares his story of his family’s deep-rooted Irish connection, his parents’ regret that their families had left, and what it meant to him to finally receive the letter of congratulations from Ireland: “I cried. It is hard for me to express what that recognition meant. Validation, reconnection, perhaps even the righting of very old wrongs.”