Who said grandads don’t suffer when their family emigrates?

We hear about the loss experienced by mothers and grandmothers, but less about us men 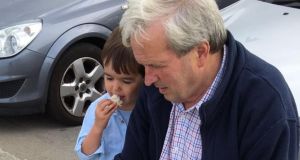 PJ Maher with his three-year-old grandson, feeding the ducks during their recent visit back to Dublin from Perth.

It is still early morning, and I am standing on the linking corridor between the car park and Terminal 2 at Dublin Airport, one eye focused on my flight app and the other on the sky overhead, searching for the Boeing 777. As grandad to a one-year-old granddaughter and a three-year-old grandson, I have been plotting their progress since they left their home in Perth almost 24 hours ago.

You would think nothing would distract this most caring and devoted grandad from the first glimpse of his grandchildren and their mother as they emerge from the exit, but a short chat with another waiting grandparent means they are already standing beside me before I see them. But who cares? They are back home with us again and that is all that matters.

The emotions are in such a tangle that it is difficult to summon up any words remotely resembling the pure joy and excitement of seeing these little Aussies. Six months ago, the day came when Grandad and Granny had to suddenly stop taking them to feed the ducks in the park, or to visit the zoo, read them stories and doing all the other things that create that special bond between a grandparent and grandchild.

With young children there is no explaining a sudden parting; that there will be no rolling around on the grass together in the park tomorrow. Who will feed the ducks or play new games of hide and seek, if Mama is busy, they wonder? Who knows how young minds deal with such questions without the benefit of reason and the sense of time.

I’ve tried to practice being aloof from the emotional wrench of saying goodbye, but have failed miserably at each final farewell. You would think us grandads are made of sterner stuff.

This latest visit could hardly arrive a day too soon. Even if we had another year to get ready for their arrival however, I still doubt their granny would have completed all the preparations, with all those toys that need to be reassembled, beds and cots prepared, and shopping lists the length of your arm. There is a knowledge and expertise at work here.

There has been a considerable leap forward in development by my granddaughter Evie, compared to six months ago. Gone are the days when the routine with her merely consisted of nappy change, bottle and sleep.

My inner amateur psychologist tells me after a day or two getting to know her again that that I am being quietly assessed as a potential fellow explorer of all kinds of surprising and curious things, as well as for my ability to forgo reading The Irish Times in her company, or answering those texts. There is also the must-see match that won’t be re-arranged to suit the sleeping patterns of your grandchildren.

The first stark reminder for me of fitness for purpose as a grandad is a tug on the duvet, usually before 6.30am. I wonder for a moment if I’ve a choice in answering the wake-up call but swiftly remember from my experience as a father that you must immediately lift yourself out of that bed, or face the far worse fate of your head being used as a bouncy ball. If you’re lucky, her mama will not have forgotten to change her nappy.

There is no typical routine to a day in the life of a grandad. Rather, it is more about being on standby and ready to go whenever or wherever that might be. You are never going to be able to enter a binding agreement with a one-year-old, so you quickly learn that it is a one way process where fitness as a Grandad is tested from minute to minute. It is a gradual learning curve that teaches you how perceptible a one-year-old can be, and how they can detect a particular mood or lapse of concentration on your part.

Their exploration skills can be exceptional. They can also in an instant pluck the sharpest and most dangerous object from nowhere, when you thought you were having some quiet time.

In rare interludes, I take time out to contemplate this extraordinary and beautiful little human being. Of course I am merely one-quarter part of her grandparents. In more delusional moments I refuse to recognise the competition. Her dark deep eyes and slight skin colouration tell of a part genetic origin from the other side of the world and further.

As I set out for the trip to the airport one more time for their return to Perth, the two are oblivious to everything, as their attention is locked into Gruffalo, playing on CD. Terminal 2 Departures has a completely different dynamic. There are no greeting balloons, no air of expectation.

Evie is perched on the stack of suitcases and Solomon is now clutching his mammy’s hands. I realise I have forgotten to rehearse my goodbyes, but it doesn’t matter, as the exits happen far quicker than I could have imagined. All I hear among the cacophony of background noise is: “Goodbye Grandad. See ya next week.”

Isn’t nature so kind, as to deprive children of any sense of time?

In no particular hurry now, I pick up some items from the seats, either forgotten in the haste or no longer required back in Perth. My psychologist-self has no comment to make.

I tune into the latest news on radio on my way home. Apparently nothing much has happened in the last nine weeks. The left-behind toys, clothes and other necessities are already being tidied away, until the next time, which is as far away as ever. The lack of noise, chatter and general chaos is not there anymore and I think of the Walter de la Mare poem: “how the silence surged softly backward, when the plunging hoofs were gone”.

Who said grandads enjoy a free pass, when it comes to the experience of emigration?