Teaching Irish in Newfoundland, the most Irish place outside Ireland 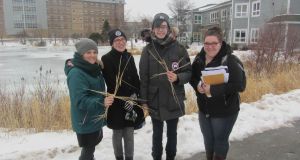 Sinéad Ní Mheallaigh (far left) with students from her Irish class in Newfoundland. ‘When I first arrived I almost felt guilty because of the high pedestal on which Newfoundlanders place Ireland.’

Tears prick my eyes as I watch the opening scenes of TG4’s ‘1916 :Seachtar na Cásca’ with my students in Canada. I realise that these brave men who organised the Rising and fought for their country had not been just fighting for the freedom of Ireland, but for the freedom of our culture. Without them, and the formation of a Republic of Ireland, I would not be living in Newfoundland right now, teaching the Irish language to students in Memorial University, St John’s.

The Ireland-Canada University Foundation funds six teachers to go to Canada and teach Irish each year, and I was lucky to secure one of these places for this academic year.

On arriving, I found a land that has many links to Ireland. Named “Talamh an Éisc”’, or the land of the fish, by the many fisherman emigrants who graced these shores in the 18th century, Newfoundland is the only place outside of Ireland that has an indigenous Irish language name.

Many people here refer to Ireland as “the Old Country” or “back home”, despite never having set foot on Irish soil in many instances. When I first arrived I almost felt guilty because of the high pedestal on which Newfoundlanders place Ireland. By comparison, how many Irish people could give you information about Newfoundland, or even point it out on a map?

When the Irish came here 200 years ago, it was quite an isolated place. They were far away from mainland Canada, far from America, and as a result, Irish traditions remained true and strong here within isolated communities. Even elements of the accent remains profoundly Irish to this day, passed down from generation to generation.

There is a strong interest in the Irish language. Irish descendent and farmer Aloy O’Brien, who died in 2008 at the age of 93, taught himself Irish using the Búntús Cainte books and with help from his Irish-speaking grandmother. Aloy taught Irish in Memorial University for a number of years, and a group of his students still come together on Monday nights. One of his first students, Carla Furlong, invites the others to her house to speak Irish together as the “Aloy O’Brien Conradh na Gaeilge”’ group.

My students in Memorial have many different reasons for learning Irish. Some like studying languages, some would like to visit Ireland, and others come to it from an archaeology or folklore background. One student even has a boyfriend in Ireland, and would like to be able to speak some Irish with him.

An important part of my role here in Newfoundland is organising Irish language events, both in the university and the community. We held an Irish language film festival on four consecutive Mondays throughout November. Each evening consisted of a short film, and a TG4 feature-length film, preceded by an Irish lesson. These events attracted people from all parts of society, not just those interested in Ireland and the language. The students took part in the international Conradh na Gaeilge events for ‘Gaeilge 24’ and we will have Gaelic sports and a huge Céilí mór later in March.

“More Irish than the Irish themselves” is a phrase often associated with the Normans who came to Ireland and married Irish women centuries ago. I never expected to fully understand what that meant, until I came here. These people celebrate St Patrick’s Day for a full month. They decorate their houses. They all dress in green for school and work. One bar even has a party on September 17th, marking six months to go. There are a number of Irish-Newfoundland groups here; the Irish Newfoundland association and the Benevolent Irish society both organise annual dances and events. On the morning of St Patrick’s Day, the pubs organise a buffet breakfast from 7.30am, with live music. Schools get a day off to celebrate.

These Irish celebrations are not limited to Newfoundland. ICUF teachers in Halifax, Ottawa, New Brunswick, Toronto and Montréal all report the same level of interest in our language and culture. The ICUF is now hoping to set up new links with Prince Edward Island, and as far west as Vancouver.

Ireland is a small country, but we are a strong country. Our presence is seen and felt all over the world, particularly during the month of March. In this important year of 1916 celebrations, it is important to remember that not only did the revolutionaries stand up for our country and our land, but they also stood up to preserve our culture, the heart of our identity. It takes up no space in the suitcase, but no matter what country we wake up in, anywhere in the world, we can wear this culture and be truly proud to be Irish.