Stress dominates every aspect of life in South Korea 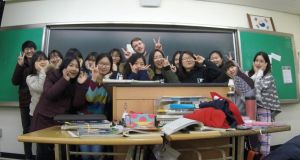 South Korea and Ireland share little in common. Guinness is popular and young people like Conor McGregor, but other than that, it’s a very different country. Although developed and highly modernised, it’s still a very conservative society. It takes time for the Irish to fit in.

Prior to my departure, I endured jabs from friends and neighbours alike as to whether I was moving to the North or South. “Say hi to Jim Jeong Un for me,” got pretty old, very quickly. I was ready to leave.

My own pre-departure knowledge of Korea was limited to YouTube vlogs. Upon arrival, I quickly realised that the expat experience is not standard, but individualised.

If there’s one aspect of Korea that every foreigner working in a public or private school will encounter, it’s the Korean surprise. Unexpected schedule changes, random cancelations and surprise dinners are all the norm in the Korean work setting. Grievances to westerners unfamiliar with the Korean way, part of life for the average Korean. Inconvenient to you? Tough. “This is Korea,” I’d be reminded in my early days here.

Then there’s the “bali, bali” culture. Roughly translated to “hurry, hurry”, Korea is a fiercely fast-paced country. Everyone is in a rush, everyone is stressed, everyone is looking out for themselves. It’s exhausting to be around. In fact, during the beloved spring and autumn seasons, people will travel hundreds of kilometres across the country to escape the congestion and intensity of Korea’s bustling cities.

Cherry blossoms and aging autumn leaves are the attraction for many Koreans during these short and precious seasons. The problem is, several million other people might have the same idea as you to “escape” the crowds of the city and experience nature. Thus you’ll often feel more stressed at to a cherry blossom festival than riding Seoul’s subway system. People are bumping in to each other for the best selfie angle instead of elbowing each other to get out of the subway first.

While it’s wrong to generalise an entire nation, I think most Koreans would agree with me that stress is a mutual and ubiquitous emotion in Korea. The first English sentence students learn in Korea is a response to “how are you?” which is; “I’m fine thank you, and you?” This expression is now used in parody by my students as a joke to disguise their enormous stress.

Why are my students stressed? South Korea is a country with no natural resources so it requires a well-educated workforce to fuel its people power engine. At least that’s the reason often cited by my students.

The common response to my concern for their wellbeing is: “teacher, I must study hard so that I can go to a good university”. They must then study hard in university to be considered for the best companies hiring graduates, who all want the same jobs. Then they are worked to the bone in their jobs until they are replaced by a cheaper, more educated graduate. They are forced to retire young and endure a life where they receive a derisory old age pension (€325 a month).

Yet when I propose the idea of moving abroad to chase your dream job, I’m met with consternation. “Teacher I couldn’t do that.” “That’s too expensive.” “What would I do when I come back to Korea?” The very idea that you could be the one who deviates from the system is preposterous. Having been in Korea over two years, I feel it’s due to a severe lack of confidence among Korea’s youth.

It is a fear of an unstable life that strives my students to wake up at 6am, study all day and clock off at midnight, every day. Yet I’m still presented with a smile every morning. They’re resilient people; forged by their genetic instinct to survive hard times.

I’m lucky enough to work at a prestigious foreign language high school, which showcases some of Korea’s finest students. I see them excel academically, but I also see them perpetuate the very qualities that need to be extinguished from Korean society: stress, sleep deprivation and ferocious competitiveness.

Everyone is friends until it’s a competition, problem is, there’s always a competition. Korean education is one big competition, between students and between educators. On every busy street you’ll see multiple signs for hagwons (private grinds academies), all competing to gain the custom of hard working parents who are willing to spend a fortune on their children’s education, to get ahead.

Korea is known as the land of the morning calm. Yet all I wish is that everyone actually calms down. The relenting pace, anxiety and competitive nature of Korean society gets to me at times. Let’s just say I’ll never complain about having to stand on a Dublin bus again.