‘London’s not that far away, but I still get homesick’

The longer I spend here the harder it will be to slip back into once-familiar ways. That scares me. 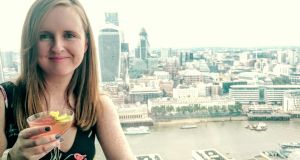 Maeve Wallace: ‘Many of my fellow Irish-Londoners have now moved home, and conversations with those still here inevitably turn to the when and how of moving home.’

I’m what many would probably consider an “emigrant-lite”; by which I mean I’ve moved to London. Not Saskatchewan, not Perth. An entirely convenient and unoriginal destination that shares with Ireland a language, sense of humour, time zone and custody of Graham Norton.

I’ve lived in London for almost six years now and, in a previous life, following graduatation in Dublin, did the whole “Irish backpacker Asian/Southern Hemisphere Tour” for 14 months, living and working in Australia for almost 10 months. The homesickness I sometimes felt then, especially at Christmas time, was of the intense and unadulterated variety. That feeling of being so incredibly far away is something I was not built to withstand, and I take my hat off to my friends, family members and acquaintances who have found a way to navigate through this and thrive in spite of it in Canada, Australia and beyond.

What I feel now, living in London, is something else entirely. Certainly, to begin with, there was no intention of staying beyond a couple of years, the vague plan being to experience living in a big city, have some adventures, get some work experience...and move home.

That was 2010. Since then, I’ve fallen in love with a Sasanach; London life has gotten a hold of me. I now take considerable pride in being an honorary Londoner. After spending far too many of our weekends in Australia in the same Irish bars every weekend (fun though it was), I’ve been very keen to avoid repeating this expat trick of creating a mini-Ireland social comfort blanket.

For me, now, living here is a fantastic opportunity to soak up and appreciate all that is unique about this city, and the longer I live here, the more strongly I feel this. Apologies for the earnestness, but working as a psychologist in the NHS, I am fortunate enough to have had some of the most diverse and fascinating professional experiences among communities I would likely not have otherwise visited, and to have met so many incredible people along the way; having been able, however briefly, to play a role in their story, and experience something of their community, their London, has been eye-opening.

But for all the positives, London is still not “home”. There’s a low-level hum in the background, this feeling of being a bit other, that I assume all immigrants must feel to a greater or lesser degree. In my experience, it has been a mostly unacknowledged otherness. Granted, some will make the Paddy Irish jokes, but I’ve lost track of the number of colleagues and acquaintances who have assumed Ireland is part of the UK.

In the wake of Brexit, colleagues said to me “you’ll obviously be fine, Ireland doesn’t count as another country does it?” and similar.

Of course, I’m not under any illusions that Ireland’s status/political context/history/culture is of any relevance or interest to the majority of British people. And I recognise the awful irony in complaining from my position of privilege that the locals don’t think of me as “more different”. Certainly, the assumed sameness doesn’t irk me in the way it used to, but I guess it causes me to reflect on the importance of “Irishness” (and all that entails) to my own sense of identity, in a way that I would never have done had I stayed in Dublin.

Thinking now about my relationship to home, I’d describe it as a “functional homesickness cycle”. You start to miss home and family terribly, so you fly back for a visit and try to frantically squeeze in as many catch-ups as possible. You temporarily feel high on life and the reassurance that no one’s forgotten you. Enjoying the wonderful comfort of being somewhere that just feels “right” at a kind of cellular level.

What follows is the crash return to London reality and heightened sadness of missing everything you’ve just left. And then, getting caught up in wonderfully tiring London plans, semi-successfully ignoring the pangs of missing until the next trip home beckons and the cycle continues. In my case, this cycle tends to be accompanied by frequent weepy episodes, typically striking while sitting at the departure gate in Dublin, and on the train from Gatwick to Clapham Junction.

Many of my fellow Irish-Londoners have now moved home, and conversations with those still here inevitably turn to the when and how of moving home. Increasingly often, these conversations are punctuated by guilt and fear.

Guilt for the very real and grown-up things you continue to not be a part of. For me, guilt over missing the weekly babysitting my gorgeous young niece with my mam, missing seeing my youngest sister grow up, not getting to spend time with my two grandmothers (which I will always regret) and all the tiny daily, weekly times not spent with those I love that I will never get back. Guilt for future plans involving uprooting the Sasanach and perpetuating the homesickness and guilt cycle for him.

And fear. The fear that, the longer I spend in London, the more it will change me and the harder it will be to slip back into once-familiar ways of life. The fear inherent in moving from a city where we are thriving and happy to the big unknown that Dublin poses.

For now, I will continue to book those flights home and try to see as much of everyone as I can. For now, London is where my life is and I love it and the people in it dearly. And home really isn’t that far away, this I know. But, for what it’s worth, it still sometimes feels a million miles away.