Wages are lower than Ireland, but the health and childcare systems are much better, writes Fionnuala Zinnecker 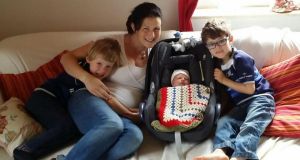 Fionnuala Zinnecker: ‘I am involved in the local community, and don’t rely on other Irish people for interaction. I know where to find them if I need them, but largely I have adapted to life here.’

So much of what we hear and read about Irish emigrants is focused on emigration to English-speaking countries. It can give the impression that those of us who have ended up, whether by choice or chance, in non-English speaking countries don’t count. But there are plenty of us, and there are great opportunities for Irish people in countries like Germany, where I live.

In 2003 the Irish economy was still doing well and I was just back from eight months travelling the world. My German boyfriend was planning his return to Germany and I decided to join him, thinking I’d give it a go and come back in a year, maybe two. I wasn’t concerned about my move being a flop, and didn’t fear the possibility of having to head back home to look for work, because jobs were plentiful at the time. It was all very easy.

Fast forward 12 years, a marriage and three bilingual children later, and I realise that now I am part of the Irish diaspora.

It is only in the last couple of years that I consider myself an emigrant, I’m just not the type of emigrant the papers are always writing about who felt they were forced to leave Ireland, or that Ireland failed them.

I am unlikely to move back to Ireland before I reach retirement age. The end of the boom in Ireland made that decision for me. In 2010 we bought a house here, and to Germans, who are so used to lifelong renting, that really meant I was here to stay.

While I love Ireland and the Irish, I am quite happy here in Germany. I am involved in the local community, and don’t rely on other Irish people for interaction. I know where to find them if I need them, but largely I have adapted to life here. I speak the language and have come to understand the customs and mindset. My friends and neighbours consider me one of them.

Perhaps it has to do with the population here being so mixed. In the kindergarten and school my sons attend, several nationalities are represented and I am proud to be the Irish contingent.

My job in telecommunications project management, which I have been in for nine years, allows me to travel all over Europe. Customers and colleagues hear my accent and straight away it creates a friendly atmosphere. People remember me because I’m Irish, and my nationality has always been an asset. Even with the economic collapse and the bailout, I haven’t heard any negative feedback from Germans about the Irish situation.

I miss the friendliness and craic you find in Ireland though. Life here is more serious. I think the Irish enjoy life and are more spontaneous than the Germans. Making decisions here seems to involve a lot more consideration and time, which is not necessarily a bad thing, but it is a definite difference.

Equally, there are things I would miss if I returned to Ireland, like the level of organisation here, for example. The health and childcare systems are very good, but there is a big trade-off in terms of wages.

Childcare is treated differently in each state, but the subsidies in Rheinland-Pfalz where we live are great, as long as you can get a place with a registered childminder or in a kindergarten. But the hours are limited; our kindergarten closes at 4.30pm.

I travel back to Ireland often, but I have made a conscious decision to take other holidays too. My children are growing up with Irish names, they have an Irish accent when they speak English, and love to visit Ireland. But I want them to enjoy the geographical advantage of being only a few hours’ drive from so many European countries, as well as getting to know the country they were born in.

Emigration isn’t all misery and loneliness. Ideally I’d love to live nearer my family and Irish friends. But with smartphones, Facebook and Skype, it is a different world to 2003 when I first left Ireland and could only phone home once a week. Plus, with five flights a day to Dublin from Frankfurt and a flight time of only two hours, I’m not far from home. As my mother, who lives in Drogheda, keeps telling me, she’d probably see me less if I lived in Cork.

I left Ireland for love and, thankfully, it has worked out.