Ich bin ein Gaeilgeoir: Irish is part of my life in Germany 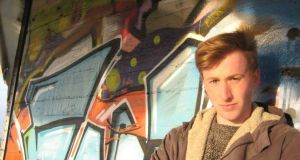 ‘In Ireland it might be considered a bit weird (at least in non-Gaeltacht areas) to be walking down the street chatting away in Irish to a friend, but in Berlin no one bats an eyelid.’ 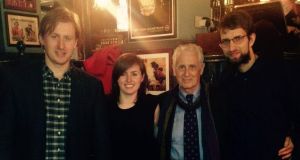 Kilian McDonagh (far left) with friends from the Conradh na Gaeilge in Berlin.

The Irish Times invited Irish speakers abroad to tell us about how they keep their love for the teanga alive in foreign places for Seachtain na Gaeilge. Below is one of the stories we received; another will be published online each day until March 17th.

It was at the time, or so it seemed amongst their friends, an unusual decision on the part of my parents to send me to an Irish-speaking primary school. In Dublin, a city of well over a million, there must only be a few thousand people who use Irish on a daily basis. Fast forward 20 years and there are now at least six people in Berlin who use Irish on a daily basis, and that number is growing.

When I first arrived in the German capital in late 2014 I knew no one. I had a rucksack on my back and vague notions of capitalising on the success story of the German economy and benefiting from the tolerant and inclusive society that supposedly went with it. There was something about Berlin - a culture of openness, of acceptance, of being free to do whatever the bloody hell you wanted as long as you didn’t cause anyone any harm - which was irresistible to me.

Looking for opportunities to meet people when you move to a foreign city on your own is very important, and much to my surprise I found out through the Irish Embassy that there was a fortnightly meeting of Conradh na Gaeilge in a café in the centre of town. One cold, dark November evening after my German language class and another unsuccessful day on the job hunt, I headed off to the meeting, feeling rather doubtful whether it would actually be taking place. At the back of the café I saw a well-dressed man sitting on his own amongst small groups of Germans enjoying after-work drinks. As I approached tentatively he looked up from his phone, “Dia dhuit a mhac” came the long out of mind and immediately disarming Connemara accent, “Tá tú san áit ceart”.

From that moment on I have built Irish into my new life here in Germany. The great advantage of living in a country where a foreign language is spoken is that the idea of multilingualism is already a part of everyday life. All immigrants in Germany have to attempt to deal with the German language on a daily basis, from buying something in a shop, tackling the infamous German bureaucracy, or eventually finding a job through German and integrating fully into society. This leads to people, including Irish people, being more ready to open up to linguistic challenges and face the fact that the dominant language of their own country is just one of an immense variety of languages which can be used to divide up the world around us and to communicate with our fellow human beings.

A minority language like Irish can benefit hugely from this openness to multilingualism. In Ireland it might be considered a bit weird (at least in non-Gaeltacht areas) to be walking down the street chatting away in Irish to a friend, but in Berlin no one bats an eyelid. The historical post-traumatic stress disorder of the Irish people regarding the island’s native language could not be of any less interest to Germans, nor to the millions of immigrants of other nationalities in Germany, many of whom are suffering from post-traumatic stress of a different and very real kind.

I was not immune from these hang-ups about Irish before I came here. But it is amazing how liberating it is to realise that Irish is just like any other language. It can be learned, practised and used in everyday life if the will exists to do so. One of the main reasons it seems people back home are reluctant to speak it is that they are afraid to sound stupid in front of other English speakers; as if the fact that their Irish is not perfect is such a cause of shame that they are afraid to let others, whose Irish is probably even worse than theirs is, know about it. This national shame and resulting defensive scorn poses a huge obstacle to normalising the use of Irish in daily life in Ireland.

But not so in Germany. Learning language is part of German culture, and that, coupled with the huge influx of people who are learning German, creates a safe environment in which to practice a language, sometimes to fail, and to try again.

Since that winter’s night in 2014 I have made friends with people of various nationalities through the meetings of Conradh na Gaeilge Bheirlín. We have two Germans in our organisation with beautiful Connemara Irish, as well as a native Irish speaker who moved to what was then West Germany over 50 years ago. We now have an active Facebook page and Twitter account and will soon be registered as a charitable organisation under German law. We have a programme of events prepared for a visit from TCD’s An Cumann Gaelach during Seachtain na Gaeilge, and last weekend we attended the Ard-Fheis of Conradh na Gaeilge in Dublin Castle, where had the honour of meeting Uachtarán na hÉireann, Mícheál D Ó hUigínn, and hearing him speak about what he hoped the future had in store for our language.

Things are going from strength to strength for the Irish language in Germany, and as I continue to assimilate more into the German society and way of life, it is nice to know that there is a little part of Ireland in me that will never change; all I have to do is open my mouth and speak.

Kilian McDonagh works in financial services. He is secretary of Conradh na Gaeilge Bheirlín and the Irish language officer of Berlin GAA.