‘I will always be Irish, but now where I roam has become my new home’ 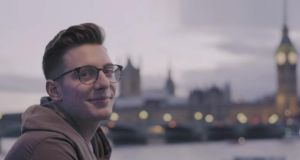 ‘I had this idea to write a love letter to Ireland, a spoken word piece for me and all those who left.’

Irish YouTuber Riyadh Kahlaf’s best-known videos about making prank phone calls and getting his mother to read out his Grindr messages have racked up millions of views, but his latest offering is a little different - a poem documenting his experience of moving to London, which pays an emotional tribute to the Ireland he left behind.

Generation Emigration caught up with him this week to find out what inspired the film, which premiered at buffer Festival in Toronto last weekend. (Scroll down to view video)

What took you to London?

I got a job offer at a major news and entertainment site based in London so left my Dublin radio job and took the jump! I worked there for three months before realising how deeply unhappy I was with the new gig, lack of creativity and being away from family and friends.

Are you a full-time vlogger now?

After three months in the new job I quit and decided to become a full-time YouTube content creator. It was a huge risk because money is not guaranteed but it was the only thing that was making me feel like me again. I could express myself, make people laugh and never had to ask anyone for permission to create something that I had in my head.

Eight months into my new London life and I’m glad to say everything is beginning to come together. My channel has doubled in size, I have UK and US TV work on the horizon and I’m partnering with brands like Netflix, Warner Brothers and even the NHS for creative projects.

Tell us about the video - what inspired you to make it?

Soon after I left Ireland I had this deep yearning for home, our accent, our culture, even our slang! Although I’m only a one-hour flight away, the culture shock is massive. You have to alter how you speak in order to be understood and you are constantly seen as the token Paddy.

I was often upset, and would call my parents for a lift or just to hear their voices. Then I began to think of the hundreds of thousands of young Irish who have left for a new life in a foreign land and realised that I surely cannot be the only one feeling this way.

I had this idea to write a love letter to Ireland, a spoken word piece for me and all those who left. Something that was both poetically and visually beautiful that captured that very odd mix of homesickness, fear and excitement that comes when you’ve emigrated. I didn’t feel like my story and my feelings had been told in video/short-film form before so I decided to make it.

I filmed all of the Ireland footage myself and then enlisted the help of three friends to compose original music, film me on the London streets, and then grade the piece to make it look pretty and cinematic. Thank you Donal, Tomek and Jasperi.

The reaction has been incredible. The piece seems to have spoken to not only Irish abroad but Irish at home. As a nation we love seeing our beautiful country being held up and celebrated, and that is what I tried to do. The purpose of the video is to connect with anyone who has left their motherland no matter where you are from or where you’ve gone.

I was lucky enough to have the video premiered at a film festival in Toronto last weekend before it went live online. I got to show it on the big screen to hundreds of people and other filmmakers who I’ve been a fan of for years. It was so surreal but incredibly satisfying to see my work being enjoyed and understood.

Smell that? That’s the smell of HOME…

My sanctuary, my childhood, my memories, my first time, my identity, my family, my Ireland.

Where the craic is mighty, where every town has multiple banter factories, the people are deadly, and the views are, well... Lovely...

Where nature and wildlife are not things you see on TV but real beauty that lies right before your feet.

Home - Where I am not absurd for saying the words THIRTY THREE AND A THIRD and asking who’s your one and how’s yer man...

Cead Mile Failté - The land of a hundred thousand welcomes - but it’s just the one that I am looking forward to... The embrace of my mother and my father, there is none other on this planet I would rather.

Generation Emigration - Yes I am now one of those who chose to take that leap into the unknown... Because, Fuck it... Isn’t that what we millennials are supposed to do?

The London Irish surviving and striving in a jungle of concrete and glass that is so foreign from our past.

The cold faces of this town were not what I found - But a place where I could be me, unapologetic and proud.

These streets they are teeming with cultures and colours and passions and backgrounds that coexist in a world where anything goes.

Sometimes, that feeling still greets me. Lonely and sad in a pad I once dreamt I had - Second guessing my choices to leave the familiar, in pursuit of what’s bigger.

But I am lucky - the times I return are like reunions I’ve earned - We dance, we laugh, we cry, we explore, we love, we remember, we create new memories... Like documentaries of our life.

I am happy, I am content, I am free, I am changed, yet unchanged. This city has given me more in eight months than I’ve had in eight years. Each day I am here I am reminded of the importance of human connection, of friends: The family you choose.

And as sadness becomes happiness and fear disappears - I realise that, yes, I will always be Irish, but now where I roam has become my new... HOME.