I wasn’t cut out to be a farmer, so I moved to America 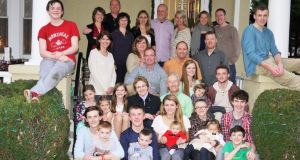 Tom Ahern and his wife Kathleen with their six children and 18 of their 20 grandchildren.

I landed in New York on May 3rd 1955 after a not so pleasant five day voyage on board SS America. I was so sea sick for three days, I did not care whether I lived or died. I had left behind my family and friends, and a carefree life.

I had a happy upbringing with my brother and three sisters in Ballyknock. I worked hard on our farm, having replaced the hired workman. When I left Dungourney school at the age of 14, I became the ploughman. I was involved in all kinds of sports, and played hurling with the Dungourney team.

After six years working at home, my Auntie Babe’s husband died and I was send to run her 90-acre farm for her, as she had no children. Of course, it was understood that I would get the farm. Seven years later, after my workman left to work in the new buildings at Ladysbridge, as I was cleaning up four acres of beet, I decided it was not for me. I don’t think I was ever cut out to be a farmer. So I made up my mind to go to America.

My Mother almost fainted when I went home and told my family. She wanted all her children to be farmers. It was a big event leaving Ireland at that time, and four carloads of family and friends came to see me off at Cobh. I was the rebel from Cork starting off a new life in New York.

I lived with the Corbetts, our neighbours from Ballyknock. They were childless and sponsored me, and I stayed with them for two years. For the first three months I worked in construction.

One day I was on my way to get my driver’s licence, and I asked the bus driver for directions. When he heard my Irish accent he asked me would I like to be a bus driver. He was from Galway. I took his phone number and I called him and he took me for the test, and I got the job. I retired from the bus company 37 years later.

For the first 15 years I was a driver, and then I worked in management training. In the beginning I worked all sorts of hours including nights and weekends. Sundays were especially hard, since I worked a route that went to Gaelic Park, where all our Irish games are played. I would see all the Irish lads and lassies going off to the games, and I had to work.

I went to all the Irish dances and made a lot of good friends from all parts of Ireland. It was a great time in America for the Irish. The Irish who came over were honest, hardworking and conscientious people. The companies here were glad to hire us, and we did not complain; we were just happy to have a steady job. Most of us had only a national school education.

I met my wife Kathleen at a céile and we’ve been married for 54 years. We have six children and 20 grandchildren. We get on fine until Cork meet Kerry in the football finals. Kathleen is from Kenmare, and a great football fan.

I’ve had a very happy life in the US, with a few bumps along the way. In March 2006 I was diagnosed with malignant brain tumours. I had an operation in one of the best cancer hospitals in the world, Memorial Sloan Kettering in New York. I was treated with chemotherapy for seven months and I’m doing fine now. I go for an MRI annually and all looks OK. I thank God every day for my family and friends and all the people who prayed for me and sent Mass cards. I have made eight trips home to Dungourney since.

As I look back now, I know I made the right choice in coming to America, because my heart was never in farming. This country has been very good to me. I am retired now for 24 years and I’m always busy fixing up my own home, which was built in 1917. Our children have their own homes and there is always something to be done. I enjoy helping them. They all live within driving distance from us, the farthest is one hour’s drive away.

I have fond memories of Dungourney and love to go back for a holiday. We always say “we are going home” even though our home has been here for many years. I hope to make many more trips.

Keep our money if you must, Ryanair. We’d rather lose our airfares than board our flight
4