After 40 years abroad there is nothing I still miss about Ireland. New Zealand is home now 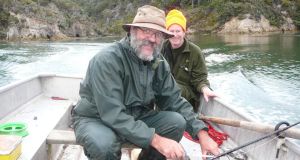 I am not only Irish now, I am an immigrant, I am a citizen of New Zealand, I am the grandfather of a New Zealander.

When I left Ireland in 1976 it was only to be for a few years of wandering before returning to Wexford. I went back to visit regularly, and even stayed for three years in the 1980s. But after being abroad for so long I had wandering feet and left again.

I had a three small children then, so it was not really sensible to up sticks and lug the suitcases, but we left anyway, first to Zambia and then to New Zealand. Here we found what we were looking for. Taking citizenship was easy to do when we had decided we were staying. Our children became Kiwis immediately, integrated without a problem, and even when they visited Ireland as adults they came back here satisfied we had made the right decision.

What did I miss? That’s easy: family, a few close friends, easy conversation and the background knowledge of a country (history, geography, natural history, politics, literature), its people, my people.

What did I find? Welcome, support and opportunity amongst a silent people with a dark sense of humour; a lot of things familiar to an Irish country man, including an economy based on grass and great natural beauty; better still, a secular society with a sense of personal freedom untrammelled by church or religious bigotry; a little racism, but a society determined to right some of the wrongs of the past; a place where I could see my children doing well.

The worst part? The 24,000km and 36 hours it takes to travel back to Monageer in Co Wexford in a sardine tin! I hate that flight; when my parents were alive I visited them every three years, but didn’t get to their funerals. Now, although my siblings live in Wexford, I don’t feel a need to return.

To me, the distant past is Ireland, the recent past is New Zealand as is the present and the future. My children are establishing a new family here and that is exciting. I rarely think of Ireland, and only very recently have I taken to looking at the headlines in The Irish Times and the local Wexford papers. This is a strange voyeurism and it will fade.

I am an Irishman by birth and early nurturing but a New Zealander by choice.

What do I miss now? Nothing. Is that sad? I don’t think so. It is the outcome of accepting a new life in a new country and living out of Ireland for longer that you lived there. I am at home here.

The history of New Zealand is part of the history of Ireland. The gold rushes were magnets for Irishmen and women; areas of the South Island were settled by Catholic people from Munster, other areas by Ulster Protestants; the first premier was an Irishman called Stafford; a Maori friend of mine is called Cassidy, another Sullivan. I know of Maori families called Stafford, probably cousins. Jim Bolger whose parents were from Wexford was prime minister in the 1990s, a host of business people are second generation Irish, and I hear Irish accents on national radio regularly.