How to overcome loneliness: My advice for other emigrants

This is Jonathan Drennan's journey to becoming an Ironman, one of the most intense physical competitions on earth. Video: Ironman 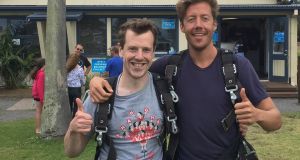 Jonathan Drennan (left) in Sydney: ‘After nearly two years in this beautiful city, I feel settled and happily in a routine. I did stand-up comedy, sky dived, completed an Ironman triathlon and played senior Australian football.’

Loneliness provides no warning to an emigrant, but this doesn’t lessen its debilitating effects. In the world’s busiest cities, amidst the hustle and bustle of daily lives, the lonely will often suffer in silence, as the knot in their stomach grows tighter.

I arrived in Sydney almost two years ago of my own accord, leaving friends in Dublin, Belfast and London for a city where I knew two people. I stepped off the plane at Sydney International Airport to be picked up by a friend’s kind mother who I had never met, to stay with a similarly kind friend I had played Australian football with on the muddy pitches of Regent’s Park years previously. The bright blue sky was a contrast to my mood that had taken me completely by surprise.

I lay in bed late into that first night in Sydney questioning my decision over and over. I am naturally crippled by shyness, and it took me years to build a semblance of a social group from university in Dublin that I had imported to London. I also love routine, whether that is visiting the same coffee shop, knowing my job role or playing with the same team mates in rugby on a Saturday. My decision to move to Sydney had been a desire to move beyond my natural inclinations, and to try and counteract them.

When you arrive in a new city, not having a job is confronting. After years working in Belfast, London and Dublin, I had some sort of professional reputation, but in Sydney I was reliant on a recruiter’s hyperbole to get me an interview. Two days after landing, I walked unfamiliar streets alone for hours, for speculative interviews that often ended with a polite smile and a handshake, but no chance of a job offer.

I had no social safety nets to occupy me in the evening, so I found comfort and solace in the city’s book shops, roaming the shelves for novels that would resonate at this time in my life.

In Ireland, we pride ourselves on our friendly nature. Australia is equally friendly, but similar to Ireland, there are groups of friends that have known each other since their schooldays, and find it hard to integrate strangers into their lives. The loneliness that claws at your brain and stomach will only be soothed by finding solace in friendship. I couldn’t bask in the loneliness I felt; I needed to find strength in being alone and the possibilities that were available.

I wrote in my diary a series of bullet points, of things I thought would help assuage the loneliness. Casting natural shyness to the side, I walked into an Australian football oval to join a Sydney Aussie Rules team. I felt no embarrassment about going to the theatre or the cinema alone in the evening, if there was something I wanted to do, I did it. Why do we persecute ourselves for being alone? Perhaps it is a social media fallacy that teaches us acceptability can only be found when surrounded by 50 close friends at all times, helpfully accentuated by a Valencia filter.

Eventually, I found a job I loved, after a period of trial and error, and through that I found good friends. The loneliness I had felt so brutally in the early months in Sydney, had been a state of mind, but also a reflection of my perceived view of the Sydney experience failing.

As an emigrant, you need to be extremely kind to yourself, and not berate yourself for the experience not matching up to your previous ideals. The loneliness you feel is natural, and you must take it as a chance to push yourself beyond your normal comforts.

After nearly two years in this beautiful city, I feel settled and happily in a routine. I did stand-up comedy, sky dived, completed an Ironman triathlon and played senior Australian football. I have my natural feelings of loneliness to thank for these experiences, and the friends I have made subsequently.

There is no shame in feeling lonely; it is simply a chance to experience things you never could have previously envisioned.