Irish citizens are travelling back from as far afield as Canada, Australia and Africa to cast their ballot

Emigrants are returning to Ireland today specifically to vote in the Referendum. Some have been travelling for well over 12 hours only to return again in 24. 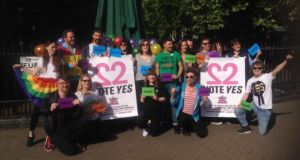 A group of about 30 young Irish people living in London departed on the train from Euston station at 9am this morning to make the journey back to Dublin to vote in the same-sex marriage referendum.

Irish emigrants may have no right to vote from abroad, but many are not letting that stop them from casting a ballot in today’s referendums.

At 2pm this afternoon, 48,000 tweets using the #HomeToVote hashtag had been posted on the social media site in the previous 24 hours, as people travelling back to Ireland to vote from as far away as Canada, Australia, Africa and Asia shared photos and messages. (UPDATE: this figure was increased to 72,000 in 24 hours between 5pm Thursday and 5pm Friday).

While it is impossible to quantify exactly how many emigrants made the journey back to Ireland in recent days to vote in the same-sex marriage and presidential age referendums, Joey Kavanagh of Get the Boat 2 Vote campaign said the number could be in the thousands.

“We are all really heartened by all the activity on social media, seeing all the photos and tweets from people who we hadn’t counted on to come home to vote. There are people pouring into Dublin Airport with Yes Equality badges on. We’ve been getting amazing messages from people coming from all over the world,” he said.

Under Irish electoral law, Irish citizens are only allowed to vote for 18 months after they move abroad, and must travel back to Ireland to cast their ballot.

Worried that these restrictions would prevent the majority of recent emigrants from having their say in the same-sex marriage referendum, the 28-year-old arts administrator, who has been living in London since last summer, set up the campaign in February to encourage emigrants to travel home.

Mr Kavanagh left Euston station in London on a train bound for Holyhead at 9am this morning with a group of 30 other Irish, which will arrive in Dublin less than five hours before the polls close this evening.

“Hopefully it will mobilise people still living at home to get out and vote, when they see the effort people living abroad are putting in to get home and have their say.”

Mark Govern, a 31-year-old working in finance in Sydney, arrived back to Tallaght in Dublin last night after spending €1,200 on flights to make the 35,000km round trip via Dubai to vote.

He took a career break last August to spend a year travelling and working in Australia. He hadn’t planned to visit Ireland before he moves home for good at the end of the summer, but when the referendum was called, he knew he had to make the journey.

“For the past eight years I have been involved in the Marriage Equality campaign in Ireland, and with GLEN (the Gay and Lesbian Equality Network). If I was at home I would have been really involved in the campaign, putting up posters and canvassing, but all I’ve been able to do from Australia is watch and comment on social media. I’ve been glued to the coverage online,” he said.

“It is a momentous occasion in Ireland, a once-in-a-generation chance for equality for the LGBT community, so I had to come back for it. I am confident that it will pass, and I want to be there with my friends and family to celebrate the result on Saturday.”

James Kelly, a 24-year-old PR consultant from Wexford who flew home from New York last weekend to vote Yes, said the marriage referendum was of huge personal consequence to him as a gay man.

“The result of the marriage equality referendum is hugely significant to my future in Ireland. I honestly don't know if I can live in a country that has proclaimed me unequal by popular vote,” he said.

“I came home to vote because I want to see a more equal, more accepting Ireland for LGBTQ people of all ages.”

Siomha Brock, a 27-year-old musician from Co Clare, travelled back from Vancouver on Wednesday to vote because the referendum is "an important chance to change our society".

“It’s more than just about marriage; it is an opportunity to open our arms to the LGBT community. My partner and I want to be seen as equal in our home country,” she said.

After organising the #BeMyYes social media campaign in recent weeks, encouraging Irish people abroad to post photos of themselves carrying #BeMyYes signs for a YouTube video which went viral, Ms Brock has spent the past few days canvassing around her hometown in Ennis.

“It has been a long couple of days, the jet lag has hit me very badly. But it was good to finally get to the polling station and vote, and I’m looking forward to the result.”

Read more: The journey #HomeToVote on Twitter: a selection of the best tweets