Earthquakes were part of the bargain when I moved to Chile

In Santiago, buildings rocked and trees shook furiously. It stopped and we went for a burger 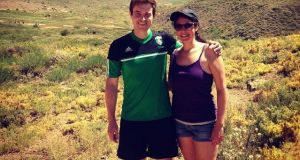 ‘Chileans are resilient, as the country suffers from all sorts of natural disasters, including volcano eruptions, floods, earthquakes and tsunamis. They get on with things in the aftermath.’

Earlier this month, an earthquake rocked Santiago, Chile’s capital, for a good 40 to 50 seconds. Its epicentre was further to the north where it registered a whopping 8.4 on the Richter scale. Such was its strength that the tsunami alarms were rung and around a million people were evacuated all along Chile’s coast. Thankfully, there was no large loss of life.

So what was it like? I was sitting down watching television in my girlfriend’s house when I noticed the noise. It was as if a steamroller was moving past on the street outside. Quite rapidly I began to notice the shaking. It increased along with the noise, now rumbling plus the sounds of whole buildings rocking. Walls, doors and light fittings began to move.

Glasses and plates chimed as the tremor continued.

We placed ourselves in the front door frame, the door open for an easy escape if things went bad. The trees in the front garden were shaking furiously from the roots up. The dog was losing the plot in the kitchen, and the cat came streaking in from outside. He didn’t stop to check if we were okay.

The quake kept on going, with every 30 seconds feeling like an eternity. It never got so strong that I lost my balance, but the whole house was moving. Chilean structures are built to withstand earthquakes. Their foundations move freely with the movement of the earth, reducing pressure on the superstructure but still scaring an Irishman who suddenly feels very far from Dundalk.

Many natural disasters are escapable if you have been forewarned, by using tornado shelters or by evacuating before floods or forest fires, or even tsunamis. But with an earthquake there is no escape, your whole world is shaking. There is nowhere to go, all you can do is wait for it to stop. The idea that this might not stop crosses your mind. It is one of the rare moments that 21st century man is absolutely powerless.

An earthquake of this size would have wreaked havoc in many countries. In Italy, for example, a much weaker quake can cause huge damage. Chile, being the country with the most seismic activity, is more than prepared. News channels quickly began spreading the news about the tsunami warning. Videos of news anchors maintaining their calm during the event began to surface.

The shaking stopped as quickly as it began. Several strong aftershocks followed over the next half hour, continuing throughout the night and into the next day. I felt tremors in my apartment, which luckily is only on the fourth floor, for days afterwards.

What did I do directly after the earthquake? I went and got Burger King with my girlfriend. Chileans are resilient, as the country suffers from all sorts of natural disasters, including volcano eruptions, floods, earthquakes and tsunamis. They get on with things in the aftermath. It was business as usual in Burger King.

I first came to the country on an exchange during my undergrad to learn Spanish. I really liked it. Chileans are similar to us in many ways, especially their sense of humour. I put it down to the long influence of the Catholic Church in both countries. I returned last September to study for a master’s degree in International Studies, and l was lucky enough to also find work at magazine.

Speaking the language has opened a lot of doors for me. I was able to get a job in journalism despite not having studied it. Why? Because I speak fluent Spanish, and can back it up with being a native English speaker. As possible destinations for emigrants go, we often concentrate on Australia, Canada and the UK too much.

Until very recently Chile has had a booming economy, as the country embraced the free market after the removal of the Pinochet dictatorship. It is one of the most modern countries in Latin America, and the quality of life is very high.

There about 200 (slightly shaken) Irish people here at the moment and they are involved in a whole range of industries. The same can be said about the Irish populations in Argentina and Peru. There is a whole world out there with plenty of jobs that are not just English teaching positions. Learn a foreign language, it gives you new perspectives and new opportunities.

But it also might land you in the middle of earthquake.

36 hours on Northern Ireland’s Causeway Coast: ‘Everyone is having a wild time’
4