Trump gets 23% of ‘virtual votes’ in online poll completed by 5,000 people 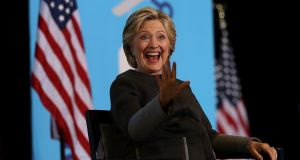 Sixty-five per cent of Irish Times readers would vote for Hillary Clinton for president, according to the results of an online poll, with 23 per cent favouring Donald Trump.

The survey, which ran for seven days on irishtimes.com, attracted 4,940 “virtual votes” from readers in 85 countries worldwide, including 46 states across the US.

While 23 per cent of respondents said they would vote for Donald Trump if they could, 31 per cent said they thought the Republican nominee will become the 45th president of the United States. Almost seven in ten said they think Clinton will be voted in.

Green Party candidate Jill Stein attracted 5 per cent of the “virtual votes”, while Libertarian nominee Gary Johnson got 3 per cent. A further 3 per cent said they would vote for a candidate other than the four named above.

Voting preferences were much more evenly balanced among those who are actually entitled to vote: of the 794 respondents who said they can cast a real ballot on November 8th, 41 per cent said they intend to vote for Trump, while 48 per cent will vote for Clinton.

Perhaps surprising given his hardline stance on illegal immigration, Trump was the preferred candidate among 23 per cent of survey respondents who identified themselves as “undocumented”.

Clinton is by far the most popular candidate in Ireland: just 18 per cent of “virtual voters” located here said they would vote for Trump if they could, compared with 30 per cent who completed the online survey from devices in the US.

The candidate’s interest in Irish affairs is important for our virtual voters: 60 per cent said it would influence their vote either “a little” or “a lot”.

There was a significant difference between respondents depending on their Irish connection. Those born in Ireland were least likely to plump for Trump, with just 17 per cent saying they would vote for him if they could, compared with 35 per cent of those of “Irish descent”, and 42 per cent with “no connection” to Ireland.

Clinton is a much more popular candidate among female respondents, with 79 per cent saying they would vote for her, compared with just 60 per cent of males.

The poll overall was of much more interest to men than women, with seven out of 10 responses coming from males.

Bar soap vs liquid: Which is better for the environment?
3