‘I still feel so connected to America, but grateful to be gone’ 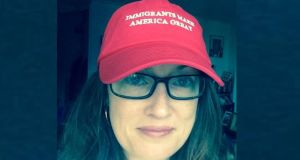 Lisa Tierney-Keogh: ‘The talk of a blue wave of Democratic voters was just that: talk.’

There is no dust settling after the US midterms. Within 24 hours of the elections, Donald Trump started clearing house and throwing tantrums. He fired attorney general Jeff Sessions and replaced him with a man many believe will try to stop the Mueller investigation into Russian interference in the 2016 election. CNN reporter, Jim Acosta, had his press pass revoked for challenging the president. In California, 12 people were murdered and dozens injured in another deadly mass shooting.

Back home in Ireland, I’ve watched the events of the past week in the country I called home for so many years in a state of numb exhaustion. There was some hope in the results of the election and then came the swift reminder of the reality of Trump’s America. Like a kick to the gut, it hurt. I’ve been gone from America three months now and I still feel it.

In the six days leading up to these elections, Trump made a battle call to his base at rallies across 11 states. He told a story of an invasion, of a legion of “illegals” coming to the border. He sent troops South. He stirred up a pot of hatred and xenophobia and turned on the heat to let it boil.

There was some hope in the results of the election and then came the swift reminder of the reality of Trump’s America. Like a kick to the gut, it hurt.

The test was a success. Republican voters bought into the fear and exercised their blessed franchise accordingly. What this means is that Donald Trump, and the GOP, can use the destitution and desperation of migrants and refugees to their advantage. They can use it to gain and sway power. It’s grotesquely effective.

Some great things happened on Tuesday. A record number of women were elected to Congress, two of who are Muslim, and two who are Native American. Among these firsts lies hope. And there’s Stacey Abrams, putting up a fierce fight against Brian Kemp in Georgia’s gubernatorial race. Her strength and steel calm evokes hope in a state election marred by corruption, greed and outright thievery of voters’ rights.

These are some of the good things. And finally, there is the beginnings of a check on a president who is the antithesis of presidential. There will be committees and subpoenas and maybe, hopefully, some grown-ups nearby to temper the cascade of catastrophic policies coming from the Oval office.

But here’s the rub: America did not reject Trump. US voters did not send a blanket statement to say they are not okay with a man who lies, stokes hatred and instills fear at the helm of their country. In fact, the message could not be more clear: huge swathes of the United States are all in on Trump. Decency did not win the day.

It defies morality and logic that Donald Trump has got a stamp of approval in the form of a Republican-held Senate. It’s mind-bending to see confirmation that voters in the US think the last two years were a net positive. So the economy is doing well, but for how long? Are tax-cuts more important than the moral compass of a country? The answer is, I guess so.

My connections to the US remain strong. I have friends and family there. I am a citizen. I care what happens to the country I spent a quarter of my life in. And I am so grateful to be out of it. There is a particularly repugnant “patriotic” saying in some quarters in America: “Love it or leave it”. I do both. I love it, and, I left it.

Maybe it will all come right. Maybe the divisive chasm among American politics and voters will narrow. Maybe an acknowledgement of how deeply wounded the country is by racism will come. It is important to retain hope and keep pushing forward because the alternative doesn’t bear thinking about.

As I pull myself away from one life and drop into a new one, I wonder will I always feel the push and pull of two nations. Do emigrants always feel like immigrants, even when they are “back home”?

A question I keep getting asked since moving home is, “have you settled in yet?” It’s a curious question and people are keen for me to say yes. The answer, though, is no. I am delighted to be home, I am happy here. But you can’t walk off what I’ve been through. You can’t brush off a whole different life in 12 weeks.

Settling in requires months and months of unpacking boxes, of finding things that remind you of a life and a place you were living less than four months ago. I’m still battling US health insurance bills. I’m pretty sure I’ve a few outstanding NYC parking tickets. I’m still invested in what happens in my former place. America has not let me go so easily.

As I pull myself away from one life and drop into a new one, I wonder will I always feel the push and pull of two nations. Do emigrants always feel like immigrants?

Perhaps the dust will never settle in America. Maybe this is what the evolution of the US looks like - an ever changing, unsettled place. In its wounds, lies its truth. Elections will come and go. But the scars left on the nation, they’ll take a long time to heal.

Lisa Tierney-Keogh is Associate Playwright at the Abbey Theatre and co-host of Irish Stand podcast. She tweets @lisatk