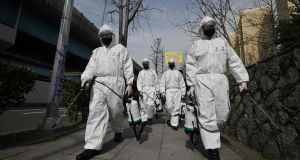 South Korean soldiers wearing protective gear spray disinfectant on the street to help prevent the spread of the Covid-19 in Seoul this week.Photograph: Jung Yeon-je/ AFP/Getty

Dairín Frawley, from Portumna, Co Galway has lived South Korea for 17 years, where she is a university lecturer. She lives with her husband Kieran and their two dogs in Ilsan, on the outskirts of Seoul.

We’ve been dealing with coronavirus, also known as Covid-19, over here for three weeks now. South Korea is very densely populated with people crowded everywhere. It has a population of 51 million. At first the cases were sporadic, similar to what we’re seeing in most countries, and the government were requesting people to exercise caution with advice such as to wear masks and wash your hands.

Then there was a person who spread the infection to a very large number of people in the southern city of Daegu and numbers skyrocketed from 31 to more than 7,000 between February 19th and today. The first case was January 20th.

Life goes on in Seoul but people are strongly advised to stay home and avoid human contact. There is no sense of panic, but the whole country is on high alert. Schools, universities, daycares, museums, all sports events, concerts and festivals have been cancelled for weeks. Anyone who can is being asked to work from home. I work in the university and had to go onto campus today today to set up for online teaching from home, which I’ll be doing until the end of March at least. There were barricades at the entrance so I had to go through thermal screening tents to gain access.

Everyone was wearing masks but people often wear face masks here anyway due to air pollution and to prevent germs spreading quickly when people are so close to each other. The change has been since coronavirus arrived the government now insists everyone wears protective masks.

Face masks are supposed to be worn once and only a few hours. The problem is there are no face masks left in the shops so a lot of people spend most of their time inside. The government is supplying four million masks a day, and rations them out through post offices and certain pharmacies. Each person can buy two masks per week, but only on designated days of the week and depending on the final number of their year of birth. My date of birth year ends in eight so I can queue to get two on Wednesday and my husband can go on Thursday.

We’re getting live updates from the government almost hourly and The Yonhap News Agency translates these into English, and we can access them on Twitter. Each time a new patient tests positive (500 or so a day right now) the public is told of every single place they have been over the previous days, through text and email. Everywhere that person has been is then shut down and disinfected for 24 hours.

The government is holding press conferences multiple times every day and all of the officials appear wearing face masks. They have tested more than 150,000 people for coronavirus now and have drive-through testing to protect staff and reduce congestion in hospitals.

At this point, 82 countries have banned or restricted flights from Korea, which is a nightmare for airlines and passengers. It also impacts shelter dogs. I work with a charity that rehomes them abroad and a number of dogs were due to be flown out last week.

Buses and trains are running as normal but everyone is masked up. There is hand sanitiser at bus stops, train stations, cross walks and elevators.

South Korea is a very tech-oriented country so online shopping is the norm but sales have really increased. Gyms are all closed so there has been a huge surge in purchases of sports equipment. Food delivery is massive and most restaurants are now empty. Shops are open and fully stocked, but staff just stand around as they are very quiet.

The hospitals are great but their staff are exhausted. Nearly all the coronavirus deaths are from a “sanatorium” in the south associated with the secretive Shincheonji Church of Jesus cult. Somewhere in the region of 60 per cent of all coronavirus cases in South Korea are believed to be linked to this secretive sect, and the brother of its leader, Lee Man-hee died from the virus at the sanatorium recently.

The government is throwing everything at this and is asking people to cooperate with their plans. From what I see a lot of people are, but they are still trying to find some members of the Shincheonji cult who refuse to be tested or treated in state-run facilities, and are now in hiding.

People are doing well, but we are very bored. Online teaching starts for schools and universities next week, because we can’t push back the semester any further. We’re not looking forward to this as it’s going to be slightly chaotic.

People are spending most of the day at home now. The government is providing a free Korean version of Netflix called Watcha to people who have to quarantine or self-quarantine.

Already so many businesses going under, which is such a shame, but it is not known how long this will go on for. I hope it can be resolved soon.