Irish Connections: The engineer designed a graceful structure that spanned the Dnieper 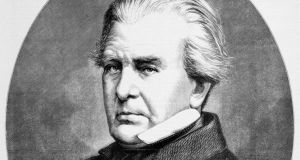 The Dnieper is one of those stately, plump waterways that tends to play a starring role in television ads for river cruises.

The fourth longest river in Europe, it rises near Smolensk and flows through Russia, Belarus and Ukraine to the Black Sea, a vital economic and cultural artery for the areas it passes through. “If the Volga is the soul of Russia,” one travel website declares, “the Dnieper is the essence of Ukraine.”

Historically, its very size made the Dnieper notoriously difficult to span. However, in the second half of the 19th century the Russian emperor Nicholas I was determined to build a bridge in Kiev, where the riverbanks are more than half a mile apart and where spring floods, swelled by melting snow in the high country of the central Russian uplands, could see water levels rise by 50ft or more, sweeping away all before them.

At almost 800m long, the bridge was the biggest of its kind in Europe

What the emperor wanted, the emperor got. And so it was that one of the most successful Anglo-Irish civil engineers of the Victorian era, Enniscorthy-born Charles Blacker Vignoles, set out from England for Russia on the evening of January 3rd, 1847, accompanied by two of his sons and bearing a set of very snazzy plans for a suspension bridge that would be the envy of Europe.

Nowadays a Lufthansa flight will whisk you to Kiev, via Frankfurt, in less than six hours.

Vignoles and his party were advised that Kiev in winter was off the travel charts altogether, so they settled for a meeting with the emperor in St Petersburg – which was a simple matter of catching a steamer to Flushing in the Netherlands, followed by a train to Mainz, a ferry across the Rhine, another train to Heidelberg and carriages to Stuttgart and Vienna.

On January 18th, they took a train to Leipzig, followed by coaches through Breslau and Cracow. The travellers had to struggle through heavy snow; it was so cold that at one stage a bottle of sherry froze and separated into its constituent parts of ice and alcohol.

On another occasion they lost their way and, unable to communicate with the local people, had to ask directions from a local priest – through the medium of Latin. Some three weeks after leaving London they finally arrived in St Petersburg by sleigh.

The tsar was suitably impressed – by Vignoles’s doggedness, perhaps, as much as his designs – and the following year, work on the Nicholas Chain Bridge began.

At almost 800 metres long, it was the biggest of its kind in Europe. Old photographs show it to have been an elegant, graceful structure as well as an engineering triumph.

A very Russian story with an Irish connection, then. But how Irish was Charles Blacker Vignoles, really? His Huguenot ancestors settled in Ireland at the end of the 17th century and he was born at Woodbrook, near Enniscorthy in Co Wexford, in May 1793.

In 1794, his father, also Charles, was sent to Guadeloupe as part of a British invasion force, where he, his wife Camilla and his baby son were taken prisoner by the French.

On the death of his parents from yellow fever, an uncle brought the infant Charles back to England, where he spent much of the rest of his life.

He did, however, design and build the first passenger railway in Ireland, the Dublin and Kingstown line. He lived to the age of 82 and was, in later life, closely involved with the work of the Royal Academy.

As for his bridge over the Dnieper, it survived the vagaries of wind and wave until the Polish-Soviet war of 1920, when it was blown up by retreating Polish troops.

Restored in 1925, it was again demolished, this time by retreating Soviet forces in 1941. In 1965, a new bridge was built on the site, serving both vehicular traffic and the local metro system.

Practical, for sure – but nothing like as handsome as Charles Blacker Vignoles’s original.