Bless me father for I have sinned, it’s been a year since my last Mass

The Catholic Church is no longer the place to gather and chat, but that changes at Christmas 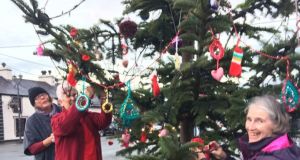 Christmas community spirit in Headford, Co Galway, where Katie Walsh is from.

Bless me father for I have sinned, it’s been a year since my last Mass and I arrived late with my cousins from the pub. It’s a pity no-one can have a chat at midnight Mass, you might have more return customers.

Christmas: the busiest time of year for the Catholic Church in Ireland. Pews are warmed that haven’t felt a human since last Christmas, the punters spill out all doors and block all fire exits listening to the word of God; never to be heard again until the following year.

This strange annual phenomenon happens every Christmas when I return home to Galway from London, and each year I am totally perplexed as to why the church makes absolutely no effort to maintain any of this Christmas custom. Is it that they truly realise there is no coming back for the people of Ireland? They’ve missed their chance at redemption and they just simply couldn’t be bothered to make the effort?

The Catholic Church has never been one for encouraging and harbouring creativity and culture in Ireland, unless it could hold onto the reins of the interactions and control every inch of it and extract the fun out.

Before I emigrated there seemed to be a void in the air when it came to community in rural Galway; I am sure it is the same for much of the rest of the country. The church is no longer the weekly haunt for a bit of a chat and to see some folk. It was becoming evident there was a longing for purpose and community, but everyone seemed a little lost.

But Ireland has rediscovered the importance of culture and how it can connect a community; it has always been there, but it feels now that a fire has been lit.

Take for instance my hometown of Headford. When I came in from the airport last week, the town Christmas trees had been ‘yarn-bombed’ by the local community group. The group has been sprinkling love and colour all over the town for the last few years and put immense effort into Headford’s nesting lark project as part of the Galway 2020 bid.

The yarn bombing group have people from all walks of life with intergenerational interactions taking place, sharing skills and building connections. If I get a chance when I’m home I’ll get stuck in with them again, and I know I will instantly feel part of their community and the magical work that they create.

For the last few years we have had a yearly community festival aptly named ‘Headfest’. Last year the local soccer club became involved organising a big red barn to be erected down at the pitch and a programme of music with local artists and national artists for four nights. During the day there was a market with local traders, a soccer tournament for the kids and various pop-up events; it was a huge success. It was incredibly inspiring to see what a team of volunteers could for the community in creating this opportunity for everyone to come together around music, craft, sport and creativity.

Plans for 2018 started straight after Headfest finished, working towards what could only be bigger and better for next year. It just goes to show that the right group of people with the passion and drive for community to thrive can make a difference.

When I left Ireland four years ago I left a country that felt saturated in desolation and darkness, lost in the aftermath of the recession. With initiatives like Creative Ireland, putting creativity and culture at the forefront of government policy, Ireland and particularly for me Galway feels energised, full of hope and promise, having also won the 2020 bid.

We no longer want the church to herd us along; it will take a collective effort to create a community and actively take part in it. Regardless of your background, nationality or religion, this new wave and approach to community in Ireland doesn’t hold the boundaries of the church; which is powerful and liberating for each and every one of us. The Catholic Church doesn’t seem to have quite clocked that to build and retain a community you need to reach out, engage and embrace rather than control and pontificate.

Ireland for me in 2019 is a phoenix flying up out of the ashes, it feels reborn and liberated and an exciting country to be in and I’m incredibly proud to see how it’s flourishing.

I wonder if anyone wants to drop Pope Francis a line and tell the numbers for attendance on Christmas aren’t quite reflective of the actual sheep on seats for the rest of the year? Saying that, I’ll be sure to head after midnight Mass this year to keep the granny happy; you’ll find me at the back, probably trying to have a chat.