If your store of swear words as Gaeilge is lacking, try some of these old phrases

Carol Barron, a professor of nursing at DCU, describes a number of Irish folk cures detailed in manuscripts written by some 100,000 schoolchildren from across Ireland in 1937 and 1938. The manuscripts are part of UCD's National Folklore Collection. 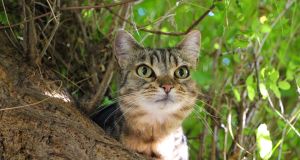 Call your kitty into service with the phrase, ‘Mallacht mo chait ort’ – My cat’s curse upon you. Photograph: Getty Images/iStockphoto

One question I am sometimes asked as a native Irish speaker is why Irish has no swear words or slang associated with it.

The answer of course is that it does, but such words and sayings are rarely, if ever, taught in our schools. Rightly or wrongly, the degree to which we are able to curse and swear with any degree fluency will never be measured in an exam.

And maybe we are the worse for it. I can’t think of many better ways of learning a language than by celebrating its aesthetic characteristics.

Of course in most cases, the swear words, curses and slang many of us encountered in our formative years first reached our ears outside the classroom.

I remember as a child returning to school after our summer holidays in the west of Ireland armed with an arsenal of words such as crabadán, bobarún and búbaire and, to the amusement of the teachers, phrases such as buinneach shíor ort and a dhiabhal de phogaí among others.

Can you imagine the opprobrium if cursing and swearing were to suddenly feature on the curriculum?

Perhaps we are indeed missing out when it comes to the vocabulary we learn in school. After all, what better measure of determining how proficient we are in a language, than by gauging the varied degree to which we can express our emotions in the heat of the moment when we really want to make a point.

Naturally enough, double standards apply when it comes to cursing or swearing in our everyday speech. As with many social conventions, there are ways around the rules allowing us to forgive ourselves the occasional use of the profane.

In Ireland, the word “feck” is so commonly used it is generally considered acceptable even in the most rarefied company. “Arse” is another one that you would get away with.

Flann O’Brien once joked in a column in The Irish Times that the average English speaker gets along with a mere 400 words while the Irish-speaking peasant uses at least 4,000.

“Your paltry English speaker apprehends sea-going craft through the infantile cognition which merely distinguishes the small from the big,” he wrote.

“If it’s small, it’s a boat, and if it’s large, it’s a ship. In his great book, An tOileánach, however, the uneducated Tomás Ó Criomhthain uses perhaps a dozen words to convey the concept of varying super-marinity – áthrach long, soitheach, bád, naomhóg, bád raice, galbhád, púcán and whatever you're having yourself.”

He went on to suggest that in Donegal there were native speakers who knew so many million words that it was a matter of pride with them never to use the same word twice in a life-time.

While he was mostly writing tongue-in-cheek, he did have a point. Language communicates a culture’s most important norms and influences how we see the world. Irish is no different in this regard and boasts a versatile lexicon symptomatic of a rich oral tradition.

As if to illustrate the point, one word I was delighted to be called recently by my three-year-old nephew was “priompallán”. Look it up in focloir.ie.

For those who prefer be more illustrative in their use of Irish, I recommend a visit to dúchas.ie. The National Folklore Collection there includes the Schools’ Collection an archive of folklore and local traditions compiled by pupils from 5,000 primary schools between 1937 and 1939. A short time spent reading the online collection will have you in stitches.

That you may be burned and scorched

Bad ending upon you

That you may leave without returning

That your house will fall upon you

That the Devil will break your bones

That you may be badly positioned on a windy day

That God will never grant you peace

My cat’s curse upon you

A widow’s curse upon you

God’s curse upon you

That the Devil may break your legs

That the Devil will make a ladder out of your spine

Long may you be astray

That the Devil may break your spine

That night will befall you

Strife and stress upon you

That the Devil makes splinters of your legs

May you burn and be severely injured

It is the place below that is meant for you, you devil

That the Devil may blind you

Weariness of heart upon you

That you may be caught in the grave

That the Devil may lacerate you

May the Devil blow you into the air

That you may not be successful on the day

May the Devil choke you

It serves you right!

I hope you die without a priest

The disease of death upon you

That you may not see the morning

That you may not come home safe

That you may never be heard of again

That the Devil may kill you

That you may be shamed and disgraced

Six horseloads of graveyard clay upon you

Off with you and your lousy lump

That you may tire

That the Devil may prepare a fire for you

That God does not grant you a proper end

That the bad weather leaves with you

Bad luck to you

That the twelve devils take you with them

May hell’s 17 devils go after you

Aren’t you the devil

You are one of the Devil’s fools

That you may fall on your head

That you may choke on your breath

That you may have red diarrhoea