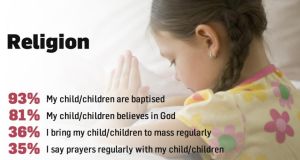 Religion continues to play some part in the lives of the vast majority of Irish children. Just 3 per cent of parents of children under 13 say religion plays no role in their children’s upbringing.

However, an Ipsos MRBI “Family Values” poll on behalf of The Irish Times also found that, while 93 per cent of parents with young children have had their children christened, a much lower percentage regularly pray or attend Mass with their children.

It also found that most Irish people do not believe baptised children should receive priority for spaces in their local school.

The survey asked 231 respondents with children of 12 or under if they had had them baptised, and about the role of religion in their children’s lives.

The results indicate that Baptism remains a priority for Irish parents. However, when it comes to everyday religious engagement the figures were much lower: just over a third of parents said they took their children to Mass regularly while a similar percentage said they prayed with their children regularly.

Mothers are more likely than fathers to take children to Mass and to pray with them.

Beyond prayer and Mass-going, the survey showed small numbers of Irish children are participating in church activities in other ways.

The Family Values poll asked 1,000 respondents if all children should have equal access to their local primary school or if priority should be given to baptised children.

The vast majority of people – of all ages, whether they had children or not – said all children should have equal access to school places.