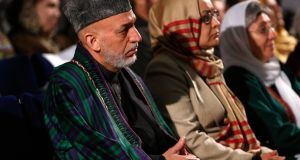 Afghan president Hamid Karzai has accused the Taliban and the US of working together to convince Afghans that violence will worsen if most foreign troops leave as planned by the end of next year.

Mr Karzai said two suicide bombings that killed 19 people yesterday — one outside the defence ministry and the other near a police checkpoint — show the insurgent group is conducting attacks to help demonstrate that international forces will still be needed to keep the peace after their combat mission ends in 2014.

“The explosions in Kabul and Khost yesterday showed that they are at the service of America and at the service of this phrase: 2014. They are trying to frighten us into thinking that if the foreigners are not in Afghanistan, we would be facing these sorts of incidents,” he said during a nationally televised speech about the state of Afghan women.

There was no immediate response from the US-led military coalition, which is gradually handing over responsibility for securing the country to Afghan forces.

Mr Karzai is known for making incendiary comments in his public speeches, a move that is often attributed to him trying to appeal to those who sympathise with the Taliban or as a way to gain leverage when he feels his international allies are ignoring his country’s sovereignty.

In previous speeches he has threatened to join the Taliban and called his Nato allies occupiers who want to plunder Afghanistan’s resources.

His latest remarks come as his government is negotiating a pact with the US for the long-term presence of American forces in Afghanistan and days after an agreement to transfer the US prison outside of Kabul to Afghan authority fell through.

US defence secretary Chuck Hagel is also making his first visit to Afghanistan since becoming the Pentagon chief.

Mr Karzai said in his speech that any foreign powers that want to keep troops in his country need to do so under conditions set by Afghanistan.

Mr Karzai offered no proof of coordination, but said the Taliban and the United States were in “daily negotiations” in various foreign countries and noted that the United States has said it no longer considers the insurgent group its enemy.

The US continues to fight against the Taliban and other militant groups, but has expressed its backing for formal peace talks with the Taliban to find a political resolution to the war.

Mr Karzai said he did not believe the Taliban’s claim that they launched yesterday’s attacks to show they are still a potent force fighting the United States.

“Yesterday’s explosions, which the Taliban claimed, show that in reality they are saying they want the presence of foreigners in Afghanistan,” Karzai said.

1 Delicious details of Mary Trump’s book open up world of president’s family
2 Pat Leahy: Fianna Fáil acting like a circular firing squad
3 Johnny Depp: Ex-wife or friend defecated in bed in ‘fitting end’ to marriage, court hears
4 Brightest comet of the century visible in Irish skies for the next week
5 Reopening of pubs that do not serve food may be delayed beyond July 20th
6 Monster or machine? Everything we know about coronavirus after six months
7 Trump postpones election rally as Covid-19 cases surge
8 Coronavirus: One death, 25 new cases reported in State
9 An Taisce publishes 2020 top ten buildings at risk register
10 Bobby Storey: The IRA's planner and enforcer who stayed in the shadows
Real news has value SUBSCRIBE