Inventive, ambitious, engaged and curious, art students from various colleges have produced work as diverse as it is excellent 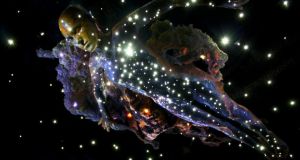 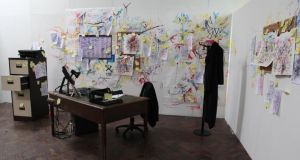 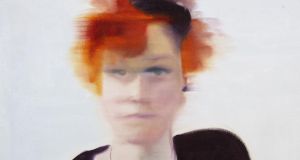 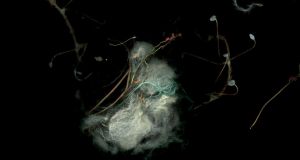 Graduate: a detail of Amorphous III by Gwen Wilksinson 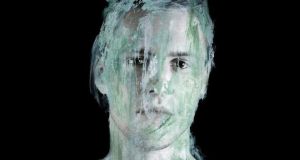 Graduate: a detail of Qualia by Lisa Burke

There are terrific things to see, and on occasion hear, at this year’s art-school graduate exhibitions. You never know what to expect.

At Dún Laoghaire Institute of Art, Design and Technology, for example, Declan Graham ushered visitors into a school counsellor’s office and into the mind of an imagined, troubled boy, David Crow. The walls were embellished with clusters of Crow’s densely worked drawings, in which he tries to make sense of inner and outer worlds that seem equally strange and disturbing to his mind. The counsellor’s notes lay on the desk. Graham’s bravura installation vividly conveyed the complexity and perplexity of mental life and the strategies used in attempts to understand and cope with it.

At Cork Institute of Technology’s Crawford College of Art and Design, Mark Buckeridge’s tremendous performance piece is a rich musical meditation on suicidal thoughts. Historically, many musicians have art-school backgrounds, and one can see Buckeridge heading that way, but at the same time he likes the license that the fine-art context allows, mingling composition, performance, audience involvement and theatrical spectacle without being pinned down as any one thing.

Another NCAD sculpture graduate, Eva Richardson McCrea, ambitiously films sections of Incident at Antioch, a play by the French philosopher and theorist Alain Badiou. Badiou is a darling of cultural theorists, in the mould of Michel Foucault or Gilles Deleuze and Félix Guattari. Not so much a drama as an extremely solemn political dialectic, his play explores the possibility of generating a new political reality through revolution.

Drawing on the theoretical framework laid out in his best-known philosophical work, Being and Event, he has very specific ideas about what is possible politically, and how, and why. Richardson McCrea’s stylised treatment, with high production values, and implying links to Ireland’s recent history, inescapably recalls Gerard Byrne’s elaborate filmed re-enactments of cultural texts, while not being overshadowed by them.

It has become almost customary to berate graduate artists for not dealing with contemporary political or cultural events, or indeed with whatever else anyone feels they should be dealing with. This year it would be hard to make any particular charge stick. US military flights feeding through Shannon, the ban on cutting blanket bogs, surveillance technologies and practices, the legacy of the Magdalene laundries, global unrest: all are tackled very well, most of them repeatedly.

Identity, from every point of view, is perennially popular with young artists, in ways that range from the playful (Melissa Breen’s Cosplay photographs at IADT) to the historical (Deirdre McGing’s account of an Anglo-Irish family, at Dublin Institute of Technology) to the deadly earnest (Robert McCormack’s consideration of the African migrants who sell newspapers at traffic intersections, at DIT; Matthew Ashe at IADT; and Anna Dudek at CIT).

Less predictably, this year there is a resurgence of interest in optical phenomena, almost a return to op art. Rather than reflecting an infatuation with new technology, this has to do with an interest in the mechanics of perception, and it plays out in lively and inventive ways: in the work of Colm Eccles at IADT and of Helen MacMahon and Mark Reynolds, both at DIT, for example.

Comparably, there’s an interest in materials, and in materials not being what they seem. Sarah Doherty’s sculptures, sede vacante, at DIT are a particularly good example: she is acutely attentive to the historical and cultural meanings of the forms and illusions she creates. Marilyn Gaffney’s collages, in two and three dimensions, at Moxie Studios, are also very impressive.

It’s encouraging to see young artists asking us to question the basics of looking and seeing rather than being carried away on the tidal wave of image production that has swept through contemporary culture.

Photography at both DIT and IADT has been reliably strong in recent years, and that remains broadly true, even if there’s a slight dip at IADT, with several underwhelming projects – though Lisa Burke, Heber Hanly, Karena Hutton, John Jordan and work already mentioned maintain the standard.

Certainly at DIT there are a number of terrific projects. As well as those referred to, Maciej Pastka’s documentation of a marginal urban community in north Poland is memorable, as are Neil Dorgan’s War Games, Kasia Kaminska’s exploration of the Gaeltacht civil-rights movement that sprang up in Connemara in the late 1960s, Patricia Klich, Treasa O’Hanlon’s Lolita and Irene Siragusa’s look at nighttime violence in Dublin.

At Moxie you’ll also find a number of very good painters making up something close to a movement or school, a notional grouping that would include such more established figures as Paul Doran, Mark Swords and Fergus Feehily. They don’t all make the same kind of work, but what comes across is a sympathy in outlook and attitude. At Moxie are Eveleen Murphy, Natasha Conway and George Warren, and one could add two impressive BAs to that list, Andrew Simpson and Daniel Jackman.

Add Diarmaid O’Sullivan and Susan O’Leary at CIT as convincing painters and it might seem perverse to suggest there is a crisis in painting.

The crisis is that painting appears be used as a default option by students and staff who are not fundamentally engaged with it and don’t ask the most obvious questions about ability and intention.

The War of Independence 1920: A year of violence, trauma and terror