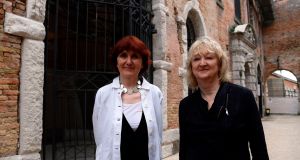 Yvonne Farrell (R) and Shelley McNamara. The pair met at university in 1974, and went on to found their firm Grafton Architects in 1978 in Dublin.

Yvonne Farrell and Shelley McNamara have been awarded the Pritzker Prize for architecture, becoming the first Irish citizens to receive the internationally recognised distinction.

Regarded as architecture’s equivalent to the Nobel Prize, the Grafton Architects pair were named the 2020 laureates of the award last March.

They are the first two Irish citizens to receive the award and will become the 47th and 48th Pritzker laureates. They are also the fourth and fifth women to claim the award in its 42 year history.

They met at university in 1974, and founded Grafton Architects in 1978.

While previous Pritzker award ceremonies have been held in historically and architecturally significant buildings across the globe, this year’s event was marked with an online video featuring a message of congratulations from President Michael D Higgins.

Ms McNamara, who appears in the video speaking from Trinity College’s Long Room chamber in the Old Library, said accepting the prize without an audience brought to mind the “empty stage” of a Samuel Beckett play.

“But of course, we are not alone,” said Ms McNamara, who is from Lisdoonvarna in Co Clare. “We are in a space which holds time, and knowledge, and treasures of the mind. We can feel the presences of all the great people who passed through this great space. We chose this room so that we could celebrate the power of architecture here in our own city. So that we would feel part of a bigger order, which of course is one of the functions of architecture.”

Accepting the award, Ms Farrell, from Tullamore in Co Offaly, said architecture is “an ancient art which needs each of us to continue and transform it”.

“Each place on earth is unique. Celebrate that fact. Being an architect means that you add to the crust of this fragile planet.”

When named 2020 laureates earlier this year, the Dublin architects were praised for their “unceasing commitment to excellence in architecture, their responsible attitude toward the environment, their ability to be cosmopolitan while embracing the uniqueness of each place in which they work” as well as their “belief in collaboration” and their “generosity towards their colleagues”.

Tom Pritzker, chairman of The Hyatt Foundation, which sponsors the award, said the pair had “demonstrated that friendship, socialization and partnership are the wellspring for the humane ideals to which their built work is dedicated.”

Grafton Architects were the recipients of the 2012 Venice Biennale silver lion award with Ms Farrell and Ms McNamara going to curate the 2018 Venice Biennale.

In 2019, they were awarded the RIAI James Gandon medal for lifetime achievement in architecture and earlier this year they received the 2020 Royal Gold Medal, the UK’s highest honour for architecture.