Why we need ‘community philosophy’

Unthinkable: Anyone can be a philosopher – if you’re open-minded enough 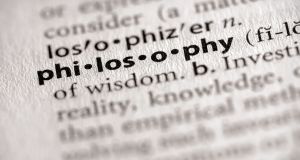 ‘Living a philosophical life is seen by some to be necessary to live a good life.’ Photograph: Getty Images/iStockphoto

Philosophy is undergoing an image transformation similar to that in science some time ago. Once seen as the preserve of old men with beards, the discipline today in academia has a greater gender balance and ethnic mix. Yet still debate rages over who is qualified to do philosophy, and where the subject starts and ends.

Prof Aislinn O’Donnell of Maynooth University believes philosophy – the real thing, and not just regurgitating the thoughts of others – can be done far beyond the walls of third-level institutions. An advocate of community philosophy, she practises what she preaches by facilitating critical thinking in schools, prisons and other settings.

Philosophy differs from public debate in that one doesn’t argue “for one’s opinion”, she explains. Rather one follows the truth wherever it may lead. Thus, O’Donnell provides today’s ‘Unthinkable’ idea: “Anyone can be a philosopher.”

How does one become a philosopher?

Aislinn O’Donnell: “In his book about education called The Ignorant Schoolmaster, Jacques Rancière says that we should begin with the presupposition of equality of intelligence. What he means by this is that we assume from the outset that everyone is equally capable as a thinker. It’s a radical, provocative and essential statement. Spinoza states very simply ‘Man thinks’. This is axiomatic for him.

“Still, the history of philosophy is a history of disagreement over who can do philosophy. This, arguably, persists today in some university departments.

“One story, stemming in part from Plato’s Republic suggests that philosopher-kings are the elite of society, ruled by their intellect, unlike other citizens ruled by either their courageous hearts or their visceral, impulsive bellies. Yet, part of European philosophy’s origin story is that of Socrates wandering about, striking up conversations with his peers in the agora or marketplace, in dialogue with others and with himself.

“My position is this: let’s presuppose without evidence or justification that anyone can be a philosopher, and engage in dialogue and discussion on the basis of that presupposition. And let’s also assume that everyone has the right to a philosophical and intellectual life and to be part of that long conversation and tradition. After all, everyone asks philosophical questions, even if they don’t necessarily think philosophically about those questions.

“We wonder about love, justice, identity, existence, meaning, politics, knowledge, and so forth. These questions matter in people’s lives and it has often been my students in non-traditional educational spaces who have most fully grasped the significance of these concepts and ideas, and the implications of different definitions.

“To be a philosopher one needs to take an interest in engaging with the complexity of concepts and ideas, and have a desire to understand more deeply, a willingness to listen to others and appraise ideas and arguments, and a sense of intellectual humility.”

What exactly is ‘community philosophy’ and do we not already have it in the form of robust public debate?

“Whilst there can be affinities between community philosophy and rigorous public debate, if such debate displays commitment to critically examining and testing ideas and claims in a sincere quest for understanding, what public debate needs is what good (community) philosophy cultivates: intellectual humility coupled with commitment, curiosity, and the ability to listen carefully and judiciously to others.

“Sometimes public debate degenerates into a more sophisticated version of arguing for one’s opinion and that, in my view, is anti-philosophical. Indeed, as Hannah Arendt argues, it corrodes the public domain.

“A wide misunderstanding of community philosophy - and philosophy for children - is that it is just coming together to express our opinions and points of view. That may have value, and it may be important to begin the philosophical conversation, but it isn’t sufficient.”

You’ve done philosophy workshops in Irish prisons. How does that work, and what philosophical issues most often arise with prisoners?

“I usually start my philosophy workshops with a couple of statements. ‘Everyone is a philosopher. Everyone can think. We all have beliefs and values and ask big questions’ and ‘I’m not here to change you’.

“The first time that I did a philosophy class with people who had been in prison or who were on day release, I was asked by one sceptical student ‘Have many philosophers been in prison?’ As I named them, I realised that philosophers have a long track record of imprisonment and exile as a consequence of ideas that challenged received ‘wisdom’ or their challenge to those forms of authority that would demand unquestioning compliance.

Sometimes people think that they’re alone in their ideas and thoughts, so it can bring a sense of relief to know that others have wondered, questioned and thought like them

“My first class in Portlaoise Prison became a debate about quantum mechanics and materialist theories of mind, which caught me off guard.

“I’ve tended to take three approaches to doing philosophy in prison. In all of them the group’s interests determine the approach. The first is to agree philosophical questions with the group, usually of the form ‘What is X?’ We define and interpret the concepts, students will sometimes reflect on them in relation to their experiences, and I often introduce them to the ideas and texts from the tradition.

“Sometimes people think that they’re alone in their ideas and thoughts, so it can bring a sense of relief to know that others have wondered, questioned and thought like them, and that their thinking is part of the long conversation of humankind.

“When we did philosophy together in Portlaoise Prison, we discussed what might be of interest and co-constructed curricula . There I worked across four landings so the sessions could be quite diverse.

Not everyone is equally skilled in reading, and my position has always been quite clear: just because you may have some difficulties with reading or writing, that doesn’t mean that you can’t think.

“The third more recent approach involved co-facilitating philosophy in Mountjoy Prison with a small team of volunteers and prison teachers.

“We use warm up exercises like ‘agree-disagree’ statements where people have to give their reasons for saying what they think, for example, happiness is more important than freedom, to model disagreement about definitions and the need for clarity of thought, before introducing the practice of doing philosophy together with questions that they have co-generated.

“At the end of the short course, some of the men reflected on how they never tended to speak or listen to one another in that way and how they now thought critically in response to the media. For others it was a liberation to know that it is perfectly fine to change one’s mind or say that one might be wrong.

“The existential, critical, and imaginative dimensions of doing philosophy are all equally important. Simply put, philosophy can help one to live; indeed, living a philosophical life is seen by some to be necessary to live a good life.”

For someone new to philosophy, if you had to recommend one book or one philosopher to read who or what would you recommend?

“One of the first books that got my mind racing was called Dialogues by Gilles Deleuze and Claire Parnet. I read the book in blur of excitement and had no capacity to articulate what it was about at the time, yet it opened my world.

“The theorist who most helps me understand and think about our contemporary world is Hannah Arendt and these days I turn to her writings on a daily basis to analyse and to imagine a world of the future.”

Question: To what extent are criminals responsible for their actions?

Hannah Arendt replies: “The sad truth is that most evil is done by people who never make up their minds to be good or evil.”