‘We use fire for healing’: a bonfire in Derry without all the acrimony

David Best builds temples in Nevada then burns them down, and he’s coming to Derry with an incendiary project 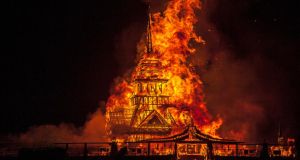 The Temple of Juno is set ablaze at the 2012 Burning Man festival. Photograph: Philip Volkers

David Best is a 69-year-old Californian artist who is planning to turn Northern Ireland’s fascination with bonfires on its head by building a massive plywood temple that will rival any 11th Night construction. And then he plans to burn it to the ground in a life- affirming conflagration.

The London-based company Artichoke, which staged the Lumiere festival of fire and light in Derry last year, is bringing Best over to Derry in March to build his temple, which will be some 70ft tall and 40ft-50ft wide.

Best regularly creates monumental, wooden, oriental-type structures to mark the end of the annual Burning Man festival in the Nevada desert in the US. He has built eight of the 15 temples that have been created at the event since 2000, including this year’s Temple of Grace.

After about two weeks of construction, each of those is torched in front of 40,000 people. And Best is planning a similarly spectacular project for Derry in March. There is an elemental force to his art. “My work comes from an old place,” he says.

Best has been a frequent visitor to Ireland since spending his honeymoon here 30 years ago. “You either get Ireland or you don’t; I get Ireland,” he says. He is married to Maggie Roth, and the couple have an organic farm and house in Tipperary. His father-in-law, William M Roth, was a Californian businessman and philanthropist who was also an expert on Jack B Yeats and WB Yeats, and was also a regular visitor to Ireland with his wife, Joan.

Best knows about the annual loyalist bonfires throughout Northern Ireland on the night before the Twelfth of July celebrations – although he has never witnessed one – and about how, to a lesser extent, nationalists have their own love of fire.

“I don’t want to get into a fistfight with anyone, but it seems to me that in Northern Ireland they are using fires to ridicule one another,” he says. “We use fire for healing, to erase some very dark bad things and to represent forgiveness.

But why the burning temples? “The reason is a very simple one. About 10 years ago a man came up to me after we had burned one of the temples in the desert and said, ‘My son [took his own life] and you have set him free.’ I made a lot of art in my life but I never made something that healed a family’s soul.

“What philosophy was holding him back, I don’t know. He seemed to feel in some sort of limbo or whatever. The burning temple seemed to give him the closure to go back to his wife and daughter and say, ‘Your son, your brother is okay now.’ What a privilege to be able to help a family get on with their life; it’s very hard to make art that does that.”

Artichoke has raised more than £30,000 (€38,000) towards the cost of the project. Helen Marriage of Artichoke, with her co-director Nicky Webb, brought Derry’s year as UK City of Culture to a close last November with the Lumiere light and fire installations, which were seen by more than 180,000 visitors.

Marriage is keen to point out that this project is not trying to outdo the Orange Order bonfires.

“It would be hubristic to think we could compete with a tradition that has been going on for years. It really is just a different interpretation and something that might be meaningful for people.

“Our desire is to involve a cross-community workforce in making something beautiful that means something to everybody, not to one side or the other.”

The temple will be built by a team from Derry, with Best and some of his international craftspeople. Those involved will have an opportunity to learn new skills during the two weeks it should take to erect the temple. The temple will be open for a week in March, during which time the public will be invited to cover its interior with messages and contributions.

Best has an initial design for the temple, which will be similar to the Balinese-style structures he created in Nevada. He will be in Derry on November 21st for the Foyle Film Festival to talk about the project and the Burning Man festival.

“In Nevada, 40,000 people watch the burning temples in absolute silence: not a word is spoken. I am hoping we can create that same reverence in Derry-Londonderry; that’s my goal.

“The temple will take two weeks to build, 15 minutes to burn. But the more valuable the offering the greater the blessing; you don’t compromise on it.”